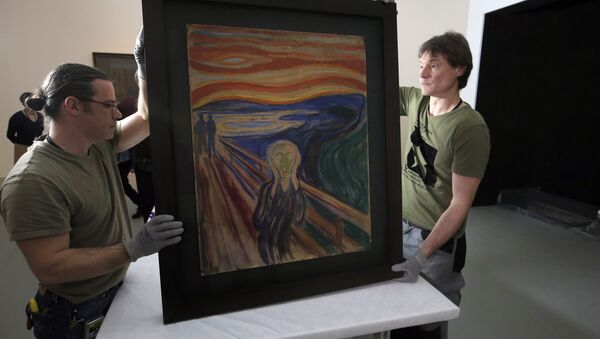 © AP Photo / Francois Mori
Subscribe
A new theory regarding the iconic ‘The Scream’ painting is that the painter, Edvard Munch, was inspired by a rare type of cloud that only appears at high altitudes.

The Scream, an extraordinarily famous painting depicting a bald figure in a black robe clutching his face and screeching, has a background dominated by a torrential, swirling orange sky. Previously believed to be inspired by either the sky following a volcanic eruption or a depiction of mental anguish, a new paper argues that Munch was inspired by "mother-of-pearl" clouds over Oslo.

In 2004, it was proposed that Munch (who wrote in his diary that "the sky turned blood red,") was inspired by an unusually colored sky as an aftermath of the 1883 Krakatoa volcanic eruption.

However, a new theory suggests that "mother-of-pearl" clouds appeared over Oslo on that day. These clouds, also called nacreous clouds and polar stratospheric clouds, only appear high in the sky during periods of intense cold. They are known for their intense colorations, sometimes resembling an oil slick in the sky and sometimes turning the color of blood.

While a volcanic eruption can turn clouds red, it doesn't change their shape: they would remain thick and puffy. The sky in The Scream, meanwhile, is wavy and thin like a mother-of-pearl cloud.

US Returns Stolen Picasso Painting Valued at $15Mln to France

"We do know that there were mother-of-pearl clouds in the Oslo area in the late 19th century," said Helene Muri, one of the study's researchers with the University of Oslo. She pointed to another Oslo resident from the same period who described the clouds in great detail, writing that "they are so beautiful you could believe you are in another world."

"There are other hypotheses," Muri told reporters. "But of course, we are natural scientists, we tend to look for answers in nature, whilst the psychologists have suggested it was inner torment that made Munch paint "The Scream'."

"Edvard Munch could well have been terrified when the sky all of a sudden turned 'bloodish red'," the paper read. "Hence, there is a high probability that it was an event of mother-of-pearl clouds which was the background for Munch's experience in nature, and for his iconic Scream."