The leader of the Astana political platform of Syrian opposition, Randa Kassis, seeks to engage P5 states – Russia, France, the United States, the United Kingdom and China – in discussions on constitutional change for Syria under the platform’s umbrella, she told Sputnik on Tuesday.

GENEVA (Sputnik) — In March, a group of Syrian legal experts coordinated by the Astana opposition platform held a seminar in Geneva on the constitutional change and agreed on 12 points that the future Syrian constitution must include.

"A majority of Syrians accept these 12 recommendations. It has been accepted by a lot of Syrians. … So we have to continue, with other constitutionalists – European, Arabs … We need to discuss it. We can invite some from the UN, some from Russia. I think we can invite P5. That’s what we really have to do. So I am going to continue with P5," Kassis said. 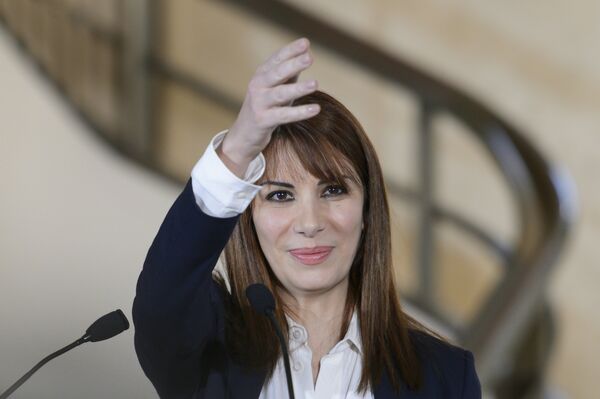 Randa Kassis gestures during a press conference following a new round of negotiations of peace talks on Syria at the United Nations Office in Geneva on March 23, 2016
© AFP 2022 / FABRICE COFFRINI

The March seminar reviewed Russia's draft for Syria's new constitution that was proposed for consideration to the Syrian delegations at Astana talks in January. Recommendations that it worked out stipulate that Syria needs to be a parliamentary republic with decentralized powers and a secular state, that the law of Islam shall not be the only source of legislation in the country, and that the Kurdish and Syriac languages need to be recognized as official alongside Arabic in the region of El Gezira.

Turkish Military Confirms Airstrikes Against Kurdish YPG in Northern Syria, Iraq
Randa Kassis told Sputnik that she believes there can be no progress on the Syrian settlement so long as Staffan de Mistura holds the mandate as UN Special Envoy for Syria.

The future of de Mistura's mandate was a subject to rumors during the latest round of Syria talks in Geneva. His contract officially ended on March 31, the last day of negotiations. There was no official statement from the UN secretary-general or de Mistura himself on whether he would continue his role as the UN special envoy, but multiple sources told Sputnik that de Mistura's mandate had been prolonged for six more months.

"We are not going to have any progress with the mandate of de Mistura. So we have two choices — to work not with the UN, but alone with Syrians and other countries, the countries of P5. When the UN is ready to replace de Mistura, we will have this work to present it to the UN. The second choice is just to cancel the role of the UN if they insist to keep de Mistura on this work," Kassis said.

Earlier in April, Russia’s Deputy Foreign Minister Gennady Gatilov told Sputnik that Moscow supports the continuation of de Mistura's work and believes he can achieve positive results on Syrian settlement with the support of the international community.