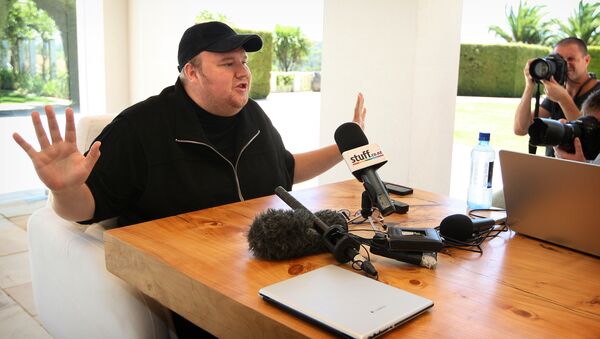 Cassandra Fairbanks
All materials
Internet entrepreneur Kim Dotcom, wanted by the US government, has filed a complaint in New Zealand against FBI Director James Comey, who is currently on a trip to the country.

Dotcom has formally reported Comey to the New Zealand police for the theft of his data by the FBI, and has requested that they question him.

“By this letter, Mr. Dotcom lodges a formal complaint with the New Zealand Police regarding the unlawful removal from New Zealand of clones of electronic devices belonging to Mr. Dotcom which were seized during the well-publicized search of Mr. Dotcom’s then home on 20 January 2012,” the letter, sent by a lawyer on Dotcom’s behalf, reads.

White House Blocked Comey’s Op-Ed on Russia’s Alleged Meddling in Elections
The letter goes on to note that the removal has been found by the High Court of New Zealand to have been unlawful.

Comey is currently in New Zealand for a conference, and it is unknown how long he will remain there. For this reason, Dotcom stressed the urgency of the police questioning him.

Dotcom is wanted in the US over a file hosting service called Megaupload, which is now defunct. The US Department of Justice has accused him of pirating, copyright infringement, wire fraud and other charges related to the website. He has also founded a cloud storage service called Mega, which uses encryption to protect user privacy.

A New Zealand court ruled in January that Dotcom and others accused alongside him could be extradited to the US, not for the charge of copyright infringement, but on the fraud charge. His lawyer is appealing the decision.

In an entertaining tweet, Dotcom poked at Comey by accusing him of stealing data, using the hashtag “pirates.”

The US has alleged that Dotcom’s file-sharing service cost Hollywood over $500 million in lost revenue.