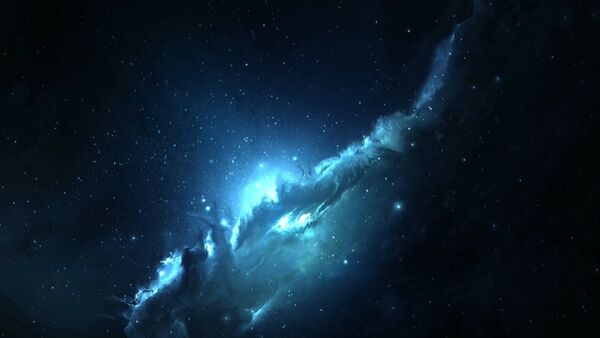 © Photo : Youtube/Alien Head
Subscribe
The discovery was made by astronomers working on the Multi Unit Spectroscopic Explorer (MUSE), one of the many instruments within the Very Large Telescope at the European Southern Observatory in Chile.

Great Escape: Hubble Finds Supermassive Black Hole Breaking from Its Own Galaxy
"In this paper, we present MUSE observations of an elliptical galaxy in Abell 2670 with long tails of material visible in the optical spectra, as well as blobs with tadpole-like morphology," the scientists wrote in their paper, published on the arXiv preprint server.

The galaxy's jellyfish appearance is caused by the ram pressure of the cluster, which strips the galaxy of its gas and young stars and drives them back to the galaxy's tail, a relatively common phenomenon.

But elliptical galaxies contain small quantities of gas and tend to have relatively few stars. That's why galaxies of this kind rarely display jellyfish-like features, even though they experience the ram pressure when passing through a galaxy cluster. Thus the Abell 2670 find has become a point of deep interest for the astronomers at the VLT.

According to Phys.org, there was an extended H-alpha disk found at the center of the galaxy. The H-alpha is a deep red light emitted by ionized hydrogen in many space objects, including nebulas and our Sun.

The team also found long ionized gas tails and bright concentrated emissions at the center of the disk. They also discovered several "blobs" made of stars, surrounding the galaxy, visible both in H-alpha spectrum and in normal visible light.

The scientists came to the conclusion that this particular galaxy has recently undergone a merger with another, with dwarf galaxies now being formed in its proximity (that might explain the "blobs"). The recent merger may be the reason for the unusual behavior of this elliptical galaxy, the scientists say.

"A likely scenario is that a wet merger occurred. Many merger features are apparent, as indicated by disturbed halo features and stellar streams in our deep optical imaging.

Another possibility is that these star-forming blobs are, in fact, tidal dwarf galaxies (TDGs) formed during the wet merger. This could explain their large masses, and lack of a spatial correlation with the ionized gas stream," the paper reads.