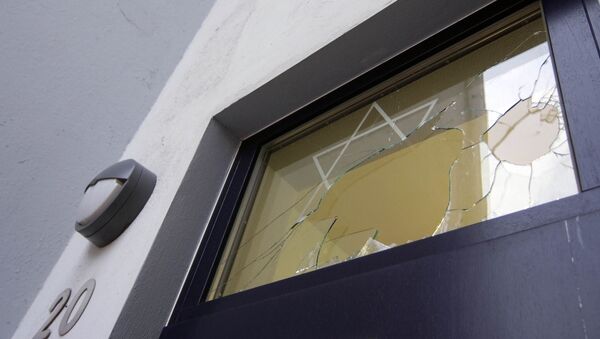 Far-right groups remain the biggest threat to Jews in Germany, but they face increasing hostility from Muslims who target German Jews in retaliation for Israel's activities in the Middle East, a report on anti-Semitism in Germany has found.

Surveys appear to show that anti-Semitism in Germany is in decline, but Jews face a renewed threat from far-right groups as well as enmity from Muslims, whose hostility is based on opposition to Israel, according to an independent report commissioned by the German Bundestag.

"The approval rate for classical anti-Semitism is only about five percent. The approval for so-called secondary anti-Semitism – everything that is connected with the Holocaust and the declaration that Jews are preventing us from finally finding our way back to normality because they are supposedly reminding us of the Holocaust – is clearly decreasing. Just 26 per cent of respondents agree with this statement," Juliane Wetzel, a historian specializing in anti-Semitism and one of the report's authors, told Sputnik Deutschland.

German Press Makes Shocking Comparison Between Erdogan and Hitler
While right-wing extremists remain the biggest threat to Jews, Muslims in Germany who base their anti-Semitism on hatred of Israel also pose an increasing threat, the report found.

"A pilot study we commissioned on the attitude of imams could not identify any radical anti-Semitism. However, there is clearly an equation of Israeli policy with the Holocaust. Now we have to observe anti-Semitism among Muslims and intensify preventive measures."

"There are many indications of the spread of anti-Semitism among refugees from Arab Muslim countries. However, the situation is also complex at the same time. There is the danger of being discriminatory and judging the Muslim population to be the bearers of anti-Semitic attitudes," Wetzel warned.

Between 2001 and 2015, there was an average of 1,522 anti-Semitic offenses committed per year, 44 of which were violent crimes. Sharp increases in anti-Semitic attacks were witnessed in 2002, 2006, 2009 and 2014, when there were escalations in the Israeli-Palestinian conflict.

Petra Pau, Vice-President of the German Bundestag and member of the leftist Die Linke party, said that criticism of Israel is often used to justify anti-Semitism.

"Forty percent of the German population agrees with statements that attack Jewish people by way of remarks that are hostile to Israel. This shows a frightening ignorance of Israel and Israeli society. Israelis are equated with Jews, although there are Christians, Muslims, atheists and other believers in Israel," she explained.

"People from all backgrounds and with any kind of educational level can be anti-Semitic. They often don't think of themselves as such.  Hatred of Jews is not a problem specific to Arabs or Muslims. But – and this is what the report tells us – there are specific patterns in certain groups with a Muslim background and we still do not know much about that," Pau said.

On Monday, Germany's Federal Interior Ministry released last year's crime figures, which showed a 6.6 percent increase in politically motivated crime, with a total of 41,549 offenses. These are categorized as offenses which "threaten the fundamental democratic principles of our society and respect for fundamental human rights."

German Business Confidence Hits 6-Year High on Manufacturing, Consumption
The most frequent politically motivated crimes, which comprised 34 percent of the total figure, were propaganda offenses such as flying flags from banned organizations.

Far-right extremists were responsible for 23,555 (57 percent) of the crimes. They committed 2.6 percent more offenses than the previous year, an increase which Interior Minister Thomas de Maiziere described as "unacceptable."

The number of crimes committed by left-wing extremists decreased to 9,389, a decline of 2.2 percent.

The authorities recorded 1,468 anti-Semitic offenses, a 7.5 percent increase, and 8,983 crimes based on xenophobia, a 5.3 percent rise. There was a dramatic 66.5 percent increase in politically motivated crimes against foreigners, with a total of 3,372 offenses.