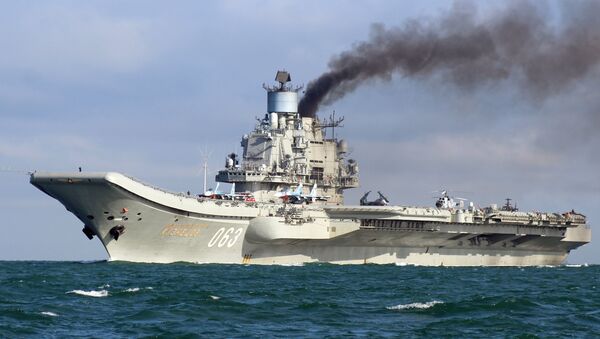 © Sputnik / Website Dover-Marina.com
/
Go to the photo bank
Subscribe
The modernization of the flagship of the Russian Navy, the aircraft-carrying cruiser Admiral Kuznetsov, will cost much less than building a brand-new ship of the same class, Navy Veterans’ Union co-chairman Viktor Blytov said in a radio interview on Saturday.

Repair of Russian Admiral Kuznetsov Aircraft Carrier Will Begin This Year
In March, Navy Deputy Commander-in-Chief, Vice Adm. Viktor Bursuk, said that repair work on the Admiral Kuznetsov would start this year. He added that there would be no serious changes made to the ship, and that fault detection would be carried out to determine the repair dateline.

Russian Admiral Kuznetsov Aircraft Carrier Returns Home After Syria Mission
On January 6, 2017 President Vladimir Putin ordered the group to return to Russia's Northern Fleet base after a new Syrian ceasefire was announced in late December 2016. The group returned to the base on February 8.