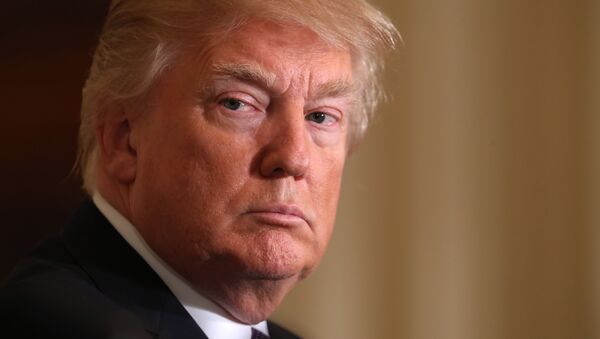 © AP Photo / Andrew Harnik
Subscribe
International
India
Africa
Julian Assange should be regarded as a hero for protecting American democracy but the US government might prosecute him to quash allegations that WikiLeaks helped President Donald Trump win the 2016 election, analysts told Sputnik.

US Charges Against Assange ‘Totally Bogus,’ Intended Only to Crush Open Govt.
WASHINGTON (Sputnik) — On Friday, the White House refused to comment on media reports the Department of Justice was ready to file charges against WikiLeaks founder Julian Assange for disclosing classified materials in 2010.

During the 2016 US presidential election, WikiLeaks published emails from the hacked account of Hillary Clinton’s campaign chairman. Clinton blamed Russia but Assange later said the source of the documents was a non-state actor, which prompted Trump to praise the WikiLeaks founder on Twitter.

"If Trump wants to show that he is not a Russian secret agent who used WikiLeaks to steal the presidency, I guess prosecution of Julian Assange is one way to go," International affairs analyst and historian Jeff Steinberg told Sputnik.

Trump may be motivated to crack down on Assange, Steinberg explained, to appease critics accusing him of being "soft" on Russia, although it also exhibits Trump’s duplicity.

"Trump's own earlier comments in praise of Assange and WikiLeaks when the dump was damaging to Hillary Clinton will resonate as more evidence of hypocrisy on the part of our President," Steinberg said.

Libertarian author and historian James Bovard told Sputnik that Assange should be praised, not prosecuted, for the services WikiLeaks has provided.

"Instead of a criminal indictment, Assange deserves a Presidential Medal of Freedom," Bovard said. "He did more to invigorate American democracy last year than the Washington Post and the New York Times combined."

Bovard also warned that sending Assange to prison would set a terrible precedent and would have dire implications for the future of freedom of speech and open government in the United States.

"Any prosecution of Assange would ultimately rest on a presumed divine right for the federal government to deceive the American people. Assange is a heretic to people who believe presidents have a right to be trusted," Bovard claimed.

WikiLeaks, Julian Assange Lash Back at CIA
Trump and his top officials were now showing they were determined to crush freedom of the press and open scrutiny of government as much as previous president Barack Obama did, Bovard noted, who focused on prosecuting whistleblowers instead of torturers.

"The only CIA official Obama’s Justice Department prosecuted for the torture scandal was John Kiriakou, a courageous whistleblower who publicly admitted that the CIA used waterboarding," Bovard recalled. "The torturers themselves laughed all the way to New York publishing houses to collect fat advances for their memoirs.”

In November 2010, the Justice Department opened a probe into potential crimes committed by Assange which is still ongoing. Assange applied for asylum at the Ecuadorian Embassy in London in 2012 out of fear of being sent to Sweden, where he has been accused of sexual assault and rape. Assange has denied all the charges.