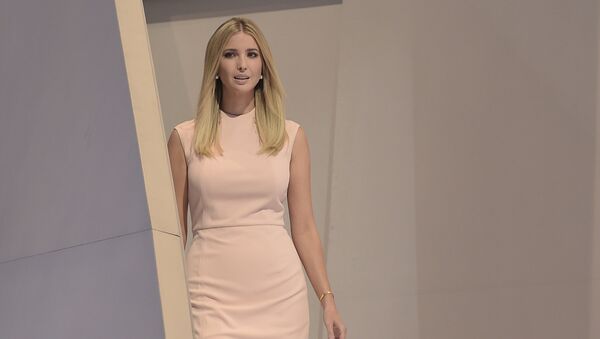 The Chinese government has recently given provisional approval to Ivanka Trump's company for three new trademarks for jewelry, spa services and ladies' bags.

Charming China: How Ivanka Trump is Selling the US to the Celestial Empire
The First Daughter's company already holds 16 fully registered trademarks in the country. And it received provisional approval for two other bag trademarks on February 20 and March 6.

The presence of Ivanka and Kushner at the dinner of Donald Trump and Xi Jinping was not just an official duty.

According to some reports there were commercial questions which were also on the table. Earlier, the company of Donald Trump's son-in-law, who is also a part-time senior adviser to the president, tried to sell a skyscraper on Fifth Avenue in New York to Chinese investors.

The transaction cost was estimated at $400 million. However, at the end of March, the negotiations stopped.

Meanwhile, Ivanka Trump’s popularity is soaring in China. Thousands of Chinese women are undergoing plastic surgery to look like her. Her name is used for the naming of various market products – from cosmetics and food additives to wallpaper.

What Makes Ivanka Trump Such a Powerful Business 'Ambassador' to China
For the residents of China, Ivanka is not only a beautiful and successful business lady but also a person who has maintained an important connection with her father and respect for him.

Many have already paid attention to the influence that Ivanka Trump has had on her father. Some openly say that it is she who plays the role of the first lady of the US and not Melania Trump.

Sinologist Mikhail Korostikov commented to Sputnik China saying that both Ivanka and her husband Jared Kushner act as special envoys of the White House in tackling delicate issues in the bilateral relationship with China's top officials.

The leading analyst of the management company Horizon, Vladimir Rozhankovsky, told Sputnik that the “Chinese authorities will do anything to avoid the US from declaring China, for example, a currency manipulator and to begin evacuating American business from the country.”