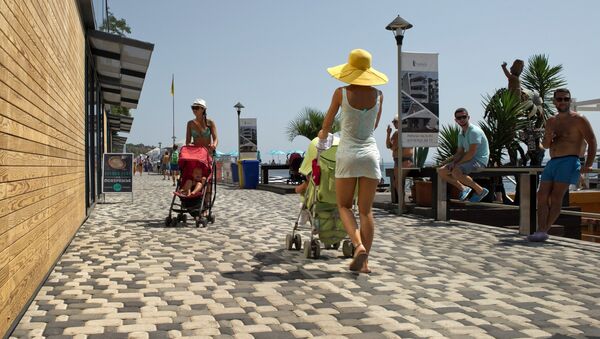 © Sputnik / Sergey Malgavko
/
Go to the photo bank
Subscribe
In an interview with Radio Sputnik, Edoardo Riksi, a member of the regional government of Liguria, Italy, said that Europe should lift anti-Russian sanctions and recognize Crimea as part of the Russian Federation.

Last year, the local legislature of Liguria, just like the parliaments of several other Italian regions, urged the central government to recognize Crimea’s reunification with Russia and ask the EU to lift the sanctions it imposed on Russia in 2014.

“I came here with a the hope for a better future because ending the sanctions and recognizing Crimea is something Europe needs just like Russia does. We must restore normal economic relations between us because the sanctions cost our producers 130 million euros last year alone,” Riksi told Sputnik Italy.

He added that people in his native Liguria were holding out for closer ties with Crimea.

Italian Entrepreneurs, MPs to Attend Yalta Forum in Crimea Despite Sanctions
“These ties are very important and we hope that a large delegation of Crimean producers will be able to come to Liguria next year. We have already agreed with the Crimean governor to prepare an agreement between Crimean seaports, Black Sea ports and the ports in Liguria. Crimea could export its wines, and we could share our experience in breeding fish and oysters,” Edoardo Riksi continued.

He also mentioned olive oil production as yet another possible area for cooperation area.

“We have new technologyies to for producing e more and better quality olive oil. We could jointly promote olive oil production in the Black Sea region,” Riksi noted.

He added that his fellow Ligurians are not afraid of the sanctions they themselves could face for doing business with Crimea.

“I hail from a town which in 1261 was granted the right to send its ships to the Black Sea and trade there. They also helped found many cities along the Black Sea coast. It was not easy, they faced many obstacles and even threats, but I think that with such a long history of cultural ties like ours, it’s stupid to be afraid of threats,” Edoardo Riksi said.

Italian Lawmakers to Attend Yalta Int'l Economic Forum in Crimea in April
The Third Yalta International Economic Forum takes place on April 20-22 in the Crimean city of Yalta, bringing together 1,500 participants, including over 200 from almost 50 countries. The Italian delegation is the biggest.

Russia has been targeted by several rounds of sanctions imposed by Brussels, Washington and their allies following Crimea’s reunification with Russia in 2014 and over Moscow's alleged involvement in the Donbass conflict in eastern Ukraine, a claim that Russia has repeatedly refuted.