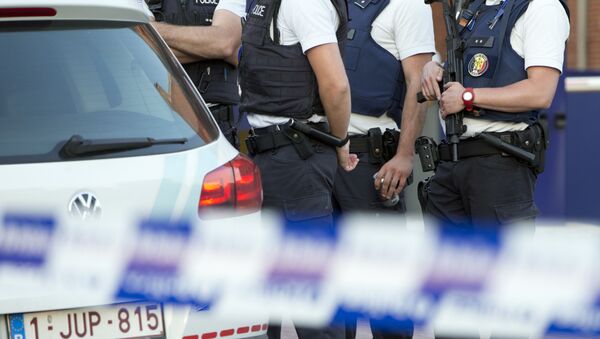 The Belgian federal prosecutor said that five people suspected of links to a terrorist group were detained as a result of police searches carried out in the Brussels region.

Military Anti-Terror Patrolling Cost Belgium Over $100Mln Since 2015
MOSCOW (Sputnik) – Five people suspected of links to a terrorist group were detained as a result of police searches carried out in the Brussels region, the Belgian federal prosecutor said.

"Overall, five people were taken in for a hearing," the prosecutor said in a statement quoted by Le Figaro on Friday, adding that the detained "are suspected of having participated in the activities of a terrorist group."

The prosecutor did not give any further details amid an ongoing investigation, but specified that the four searches carried out in Molenbeek, Ganshoren and Roosdaal municipalities were not related to the Paris shooting on Thursday night that led to the death of one police officer.

"[This case] is totally distinct from the files relating to the attacks in Paris on November 13, 2015, in Brussels/Zaventem on March 22, 2016, or this past April 20 attack in Paris," the federal prosecutor said.

A total of 32 people died in two bombings at the Brussels Zaventem airport and at a metro station on March 22, 2016. In November 2015, 130 people were killed and over 360 were injured in a series of coordinated attacks in Paris. The Islamic State (ISIL, also known as Daesh) terrorist group claimed responsibility for the attacks.

Daesh has also reportedly claimed responsibility for the Thursday night shooting in Paris. However, Paris prosecutor Francois Molins said on Friday that the attacker, identified as 39-year-old Karim Cheurfi, appeared to have no links to any extremist group, even though he had four previous convictions.