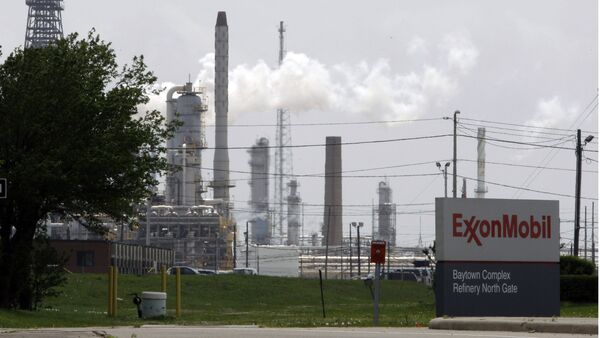 WASHINGTON (Sputnik) — On Wednesday, the Wall Street Journal citing unnamed sources claimed that Exxon Mobil recently asked the new US administration for permission to drill oil alongside Rosneft in the Black Sea, the area covered by sanctions imposed in the wake of Crimea's reunification with Russia.

“It is impossible to tell whether the [US] Treasury Department will approve this hypothetical petition for waiver or not, although it will be undoubtedly facing a formidable opposition by both Republicans and Democrats if they anticipate doing so,” Middle East Institute scholar Rauf Mammadov said on Thursday.

Mammadov added that given the claims that Russia has intervened in 2016 US elections, the current domestic political climate is antagonistic to anything related to Russia.

However, Mammadov pointed out, Exxon Mobil will continue to defend its commercial interests anywhere in the world since in light of low oil prices, it is becoming highly competitive for major oil companies to replenish their reserves.

US Senator McCain Says Exxon 'Crazy' for Trying to Resume Business With Russia
Since the arctic basin of Russia is one of the most promising untapped oil-rich basins left across the globe, Mammadov continued, Exxon Mobil will be interested to tap into that basin as soon as possible.

GasBuddy.com Senior Petroleum Analyst Patrick DeHaan told Sputnik that there will most likely be pressure from within the Trump Administration for the US Treasury to not approve the waiver request.

“I’m sure there would be pressure from some in the administration to deny it as to not appear improper,” DeHaan said.

DeHaan added, however, Trump is unlikely to let US Secretary of State Rex Tillerson’s association with Exxon Mobil dim his pro-energy views. Despite the pressure, DeHaan argued, there is a decent chance that Trump will approve the waiver anyway.

On Thursday, US Congressman Eliot Engel said the Treasury Department must reject the waiver request from Exxon Mobil or it would be playing into the hands of Russian President Vladimir Putin, while US Senator John McCain said in a statement that Exxon Mobil must be mentally unstable to apply for the waiver request.

The joint venture deal between Exxon and Rosneft, worth hundreds of billions of dollars, was struck in 2012 by then-Exxon CEO Tillerson and Putin.