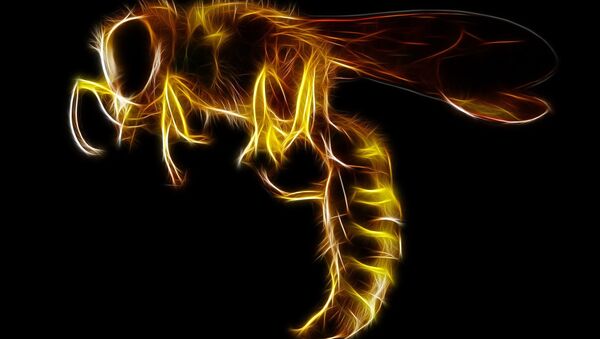 Researchers have fiddled with the genes of many creatures, often for positive practical purposes. However, University of California scientists have now succeeded in editing the genes of a wasp to give the stinger bright red eyes - for little reason other than they could.

As of April 2017, over 75,000 species of wasp have been identified. While the vicious, buzzing insects inspire fear in many, University of California researchers have now created a variety of wasp that certainly takes the mantle of most terrifying in terms of aesthetics — the red-eyed jewel wasp.

The beast was "created" via CRISPR gene-slicing technology, with biologists editing the genes of the Nasonia vitripennis to change its eye color. The method, still under development and subject to legal challenges, allows scientists to change or add DNA within a cell. Since its development, CRISPR-Cas9 techniques have been used to edit pig DNA, allowing organs to be transferred to humans, while scientists in China are using the tools in living humans to inject cancer-fighting blood cells.

In explaining their motivations behind the aesthetic rejigging, the academics behind the makeover admitted they were solely driven by the desire to be the first to attempt to edit the genes of a wasp that has previously been widely studied.

"We wanted to target a gene that would be obvious, and we knew from previous studies that if the gene for eye pigmentation was knocked out, they would have red eyes, so this seemed like a good target for gene disruption. Big beautiful red eyes are something you won't miss," said Professor Omar Akbari.

Nonetheless, in the researchers' published study, they detail how eggs from the wasps were collected, injected with Cas9 DNA mixtures, and then transferred back to the host. After 19 days, the mutant wasps were born. Moreover, their red eyes are heritable.

Whether the eyes are "beautiful" or not will undoubtedly prove controversial — although those who take the view they're horrifying accoutrements can rest easy. It's likely these creatures won't be terrorizing the skies anywhere anytime soon — the researchers document how their efforts led to the deaths of some of the wasps, as the formulation of the gene wasn't completed correctly.

"You have to use a very-very fine needle and a microscope and individually inject hundred to thousands of embryos, but in the end, we developed a protocol that can be used to cut the DNA in this organism and we showed that it works. You need a really steady hand and it requires a lot of patience in micro manipulation that one can learn over time. Ming Li, a postdoctoral researcher in our lab has mastered the technique," Professor Akbari said.

​Nonetheless, the academics assert their work proves the technique can be used to target specific genes in future, even in tiny animals.

"Our results demonstrate the CRISPR/Cas9 system is a powerful tool for genome manipulation in N. vitripennis, with strong potential for expansion to target critical genes, thus allowing for the investigation of several important biological phenomena in this organism," the research paper concluded.