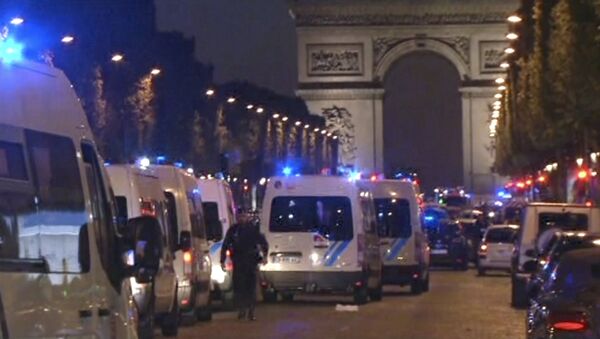 The attacker who carried out the Thursday night shooting in Paris was 39 years old and was previously known to French intelligence for his "radicalization," French media report.

MOSCOW (Sputnik) — On Thursday night, a shooting was carried out at the Avenue des Champs-Elysees in the French capital, leading to the death of one police officer. Two other police officers and a woman, who was passing by, were injured, according to Paris Prosecutor Francois Molins. The attacker was neutralized by police.

BFMTV reported on Thursday that the attacker was 39 and he was known to the French General Directorate for Internal Security (DGSI) for his "radicalization."

According to BFMTV, the man was previously sentenced to 15 years in prison for shooting two police officers in 2001.

Paris Attacker Identified, Police Checking for Possible Accomplices
The attacker had reportedly lived in Paris suburbs prior to carrying out the Thursday night shooting.

Molins told reporters in the early hours of Friday that the identity of the attacker had been established but was not going to be revealed amid an ongoing investigation, which is being carried out by the anti-terrorism unit of the Paris public prosecutor’s office and DGSI.

The Islamic State (ISIL, also known as Daesh) terrorist group has reportedly claimed responsibility for the Paris attack. French media said late on Thursday night, citing the Daesh-affiliated Amaq news agency, that the attacker was identified as Abu Yusuf, a Belgian who was a Daesh fighter.

French President Francois Hollande said in a late Thursday address that the attack was "of terrorist nature." Hollande plans to hold a special meeting in connection with the Paris shooting on Friday.

Police are now checking for any possible accomplices that the shooter could have had, according to Paris prosecutor Molins.