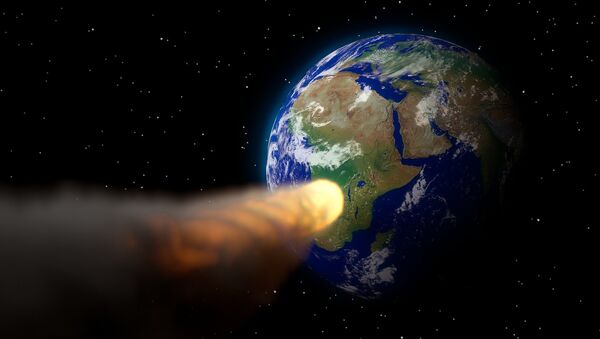 Russian scientists have simulated the Earth’s collision with a one-kilometer-wide (0.6 mile) asteroid and created a model of the catastrophic consequences this could have on our planet.

In a plotline taken straight from a science-fiction movie, experts from the Emergency Situations Ministry’s Scientific Research Institute, the Institute of Astronomy and the Institute of Geosphere Dynamics of the Academy of Sciences of Russia have predicted that a one-kilometer-wide (0.6 mile) asteroid slamming into the Earth’s surface could wipe out a major city or cause a devastating tsunami if it lands in the sea.

Science & Tech
Woosh: Largest Asteroid to Make Close Approach to Earth in 13 Years Swings By
In a recently published study, the scientists say that asteroids that big do not burn up as they hurtle through the Earth’s atmosphere and that the amount of energy they release on impact is enough to send seismic waves spreading hundreds of kilometers away and setting vast territories on fire.

According to the research, 24-36 cm (9-14 in) brick walls start to crumble when subjected to 20 kilopascals (kPa) of pressure, and concrete walls of the same size are completely destroyed at 35 kPa. The impact area where pressure exceeds 35 Kpa would be about 400 kilometers (248 miles) across.

Scientists also warn that all these catastrophic consequences will happen within a matter of seconds, and that just 10 minutes after the asteroid hits, the impact area will be covered with a cloud of dust almost 800 kilometers (497 miles) across.

Compared to this, the March 2010 eruption of Iceland's Eyjafjallajokull glacier volcano would look like a firecracker.

Additionally, when mixed with the dust raised into the atmosphere by the force of the impact, the smoke and ash from the massive forest fires would render the air across the world almost unbreathable.

As if that was not enough, the resulting electromagnetic disturbances would severely disrupt telecommunications and satellite navigation across the globe.

Overall, the possible collision of a one-kilometer-wide (0.6 mile) asteroid with the Earth would result in a regional-scale catastrophe that would impact dozens of countries.

On the bright side, however, scientists say that collisions like this happen only about once every 1 million years.

Science & Tech
Scientists in Russia Create 3D Model of 2013 Chelyabinsk Meteor
Russia made headlines around the world when a 20-meter long meteorite exploded approximately 30 kilometers over the city of Chelyabinsk in the Ural Mountains on February 15, 2013.

Although the blast released a staggering amount of energy (26-33 times as much as the atomic bomb detonated over Hiroshima), only two people were seriously injured due to the extremely high altitude of the explosion.