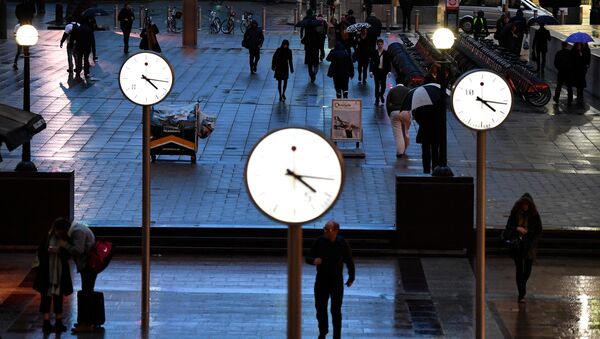 Surprisingly, the British economy has defied all the Brexit-related risks to the economy thus far, and the upcoming snap election will have a negligible impact on the economy, which is poised to grow at the second-fastest pace after the US among the advanced nations this year.

IMF Won't Commit to Greek Bailout Fund Without More Reforms - or Relief
Kristian Rouz – The International Monetary Fund (IMF) raised its forecast for the UK’s economic growth in 2017 as the Prime Minister Theresa May called for a snap election later this year. The Fund cited the unexpected stronger resilience of main British industries to political shocks and overseas headwinds in their updated economic outlook.

The IMF said they expect the UK economy to expand by 2pc year-on-year in 2017 compared to their earlier predictions of just 1.5pc for the year, having also said that the rise of protectionism might hold back British growth in the medium-term. Nonetheless, the UK would be the second-quickest growing advanced economy in the world after the US, the Fund said in their semi-annual World Economic Outlook.

The world economy is gaining momentum, the IMF said, having also reviewed their global growth projections up to 3.5pc in 2017 and to 3.6pc the next year. This is a good sign for commodities markets in particular, and the UK is a prominent oil producer. The reviewed economic outlook also includes a more favorable assessment of British manufacturing and other industries.

GDP expansion has “remained solid in the United Kingdom, where spending proved resilient in the aftermath of the June 2016 referendum in favor of leaving the European Union,” the Fund said.

Indeed, British consumers, who drive some 79pc of the UK’s GDP, have maintained a steady pace of spending and borrowing throughout the post-Brexit referendum months up to date. The rebound in industrial activity and banking sector sustainability have both greatly contributed to the UK’s economic resilience. Another factor has been the Bank of England’s cut in interest rates to an unprecedented 0.25pc from 0.5pc; the prior rate had been left intact since the global economic crisis of 2009.

“The global economy seems to be gaining momentum – we could be at a turning point,” Maurice Obstfeld of the IMF said. “But even as things look up, the post-WWII system of international economic relations is under severe strain despite the aggregate benefits it has delivered – and precisely because growth and the resulting economic adjustments have too often entailed unequal rewards and costs within countries.”

The Fund had previously expected the UK to grow by 1.1pc in October 2016 when Brexit fears were rife, and by 1.5pc in January after these concerns had gradually faded. The Brits defied the murky projections both times, and now that Prime Minister Theresa May has called for a snap election, the UK’s economy will likely be unaffected both in terms of forward-looking analysis and actual performance.

Deja Vu? UK May Repeat US Election Turmoil in June

“She seems to favor less austerity and less restrictive policies than her predecessors. She's a more centrist prime minister,” Jonathan Eley of the Financial Times wrote. “If she follows through on that, that could prolong consumption and growth in the UK. And that would benefit both shares and the pound.”

Indeed, the Britons are disgruntled with the economic realities of the post-European debt crisis of 2011 and related austerity policies. as the May cabinet is considering implementing fiscal stimulus in the form of greater spending and a tax adjustment, Albion’s economic subjects might finally have some wiggle room and breathing space to enhance their well-being in terms of disposable incomes.

The IMF, however, pointed out the longer-term challenges to the UK’s economy, stemming from the perceived disadvantages of trade protectionism. Cabinet will have to work hard achieving profitable and beneficial international trade deals after the actual separation from the EU in order to enhance the UK’s exports and continue trimming the foreign trade deficit.

“Though highly uncertain, medium-term growth prospects have also diminished in the aftermath of the Brexit vote because of the expected increase in barriers to trade and migration, as well as a potential downsizing of the financial services sector amid possible barriers to cross-border financial activity,” the IMF said.

According to the IMF, the British authorities will have to be extremely cautious when it comes to certain policy measures and resulting economic consequences.

Protectionism is beneficial, but may be harmful in the absence of proper economic diplomacy. A quicker pace of interest-rate hikes by the BOE might stir financial sector disruptions and undermine domestic borrowing and investment. Deregulation might increase overall economic volatility and create a hazardous high-risk environment.

The upcoming general election will produce certain economic risks closer to election day, the IMF observed, but the situation will immediately stabilize after the results are announced.