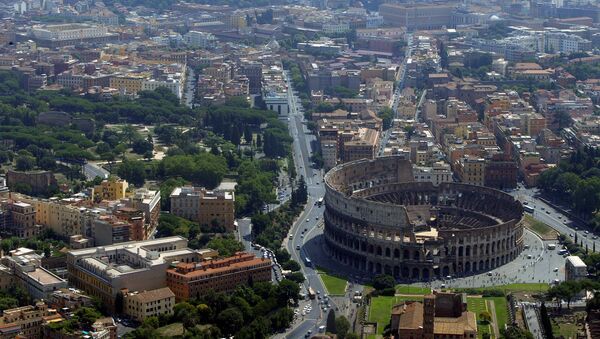 YALTA (Sputnik) — Italy has lost up to four billion euros ($4.3 billion) since the introduction of sanctions against Russia in 2014, Italian lawmaker from the Lega Nord (LN) party Sergio Divina said on Thursday.

"The sanctions are against inner interests of Europe. It costs a pretty penny, especially for those that just like Italy, suffered from the decrease in export to Russia. Since the introduction of sanctions, Italy has lost from 3.6 to 4 billion euros. We still feel the effect," Divina said during the third annual Yalta International Economic Forum in Crimea.

The three-day forum kicked off in the Russian city of Yalta on the Crimean peninsula earlier on Thursday, with over 1,500 lawmakers, officials, economists, businessmen and investors from more than 40 countries taking part in it.

"A delegation of entrepreneurs from [the Italian northeast region] Veneto are in Crimea, and this fact clearly says that our companies seek to overcome the blockade and to restore their presence at the Russian market," Divina said, adding that hopefully the Italian government will review its stance on Russia.

Since 2014, relations between Russia and the European Union and the United States, deteriorated amid the crisis in Ukraine. Brussels, Washington and their allies introduced several rounds of sanctions against Russia on the pretext of its alleged involvement in the Ukrainian conflict, which Moscow has repeatedly denied. In response to the restrictive measures, Russia has imposed a food embargo on some products originating in countries that have targeted it with sanctions. In June 2016, the countermeasures were prolonged until December 31, 2017.

Home, Sweet Home! Crimeans Feel Happy About the 'Future of Their Children'
A number of Italian regions, namely Lombardy, Liguria, and Veneto called for lifting restrictive measures imposed on Russia.

In July 2016, the Lombardy Regional Council supported a resolution, initiated by the Lega Nord party, under which Crimea was recognized as a territory of Russia. The resolution called on the Italian government to resume cooperation with Russia, condemn the EU policy regarding Crimea and lift anti-Russia sanctions.

000000
Popular comments
Easy problem to fix if the Italians have the balls to do so. Just tell the Americans where they can shove their sanctions where the sun doesn't shine and start repairing their relations with the Russians.