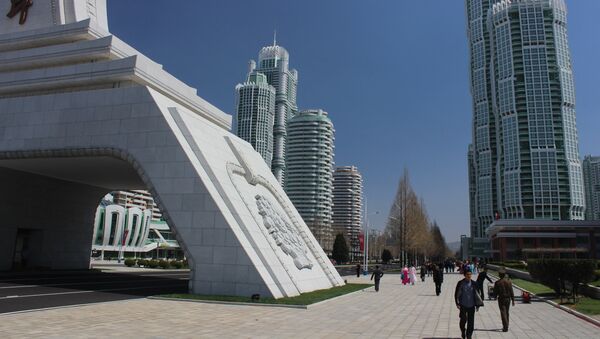 TOKYO (Sputnik) — The role of Russia and China in settling the North Korean nuclear issue is important and cooperation between Japan and these countries will continue in order to put pressure on Pyongyang, Japanese Chief Cabinet Secretary Yoshihide Suga said on Thursday.

"Russia and China are members of the six-party talks [on North Korea] and also members of the UN Security Council, so their role is important. The dialogue with North Korea for the sake of the dialogue is pointless. We will continue to coordinate with Russia and other states and to demand from North Korea to comply with the UNSC resolutions and to refrain from provocations," Suga said at a press conference.

North Korea Warns of 'Super-Mighty Pre-Emptive Strike' After US Navy Gaffe
Tensions around North Korea's activities with both nuclear and non-nuclear weapons have drastically escalated in recent months, after Pyongyang conducted a number of nuclear tests and ballistic missile launches in violation of the UN Security Council's resolutions.

The most recent missile launch by Pyongyang reportedly took place early on Sunday but, according to South Korea's Joint Chiefs of Staff, ultimately failed.

In response to the tensions in the region, the United States sent a naval group led by the US aircraft carrier Carl Vinson to the Korean Peninsula. On April 14, US media reported that US President Donald Trump might order a strike against North Korea if Pyongyang decided to carry out another nuclear weapon test.