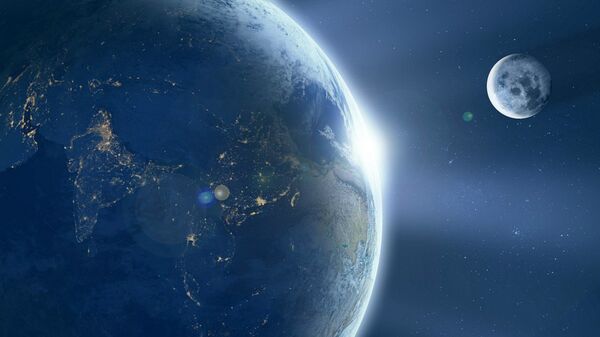 A scientist from the Indian Space Research Organisation (ISRO) has stated that India is working to exploit natural resources on the moon to power the country’s energy requirements by 2030.

India Looks to Use Space Research Advances to Make Electric Cars 'Greener'
New Delhi (Sputnik) – ISRO is working on mining lunar dust, which is rich in Helium, and transport back it to India, said Dr Sivathanu Pillai, an ISRO scientist who earlier worked as the chief of the Indo-Russian venture, BrahMos Aerospace.

“All of India’s energy requirements could be met through Helium 3 mined from the moon. By 2030, this processing target will be met, he said while delivering the valedictory address at the three-day Observer Space Foundation-Kalpana Chawla Space Policy Dialogue in New Delhi, organized by Observer Research Foundation, a private think-tank.

According to Pillai, the upper layer of the moon’s surface, Regolith, has abundant Helium 3 to meet the energy requirements of the entire planet and not just India. An isotope of Helium, Helium 3 can fuel nuclear reactors to provide an enormous amount of power without any harmful carbon emissions or radioactive products.

It is dispensed by solar winds on the moon’s surface and gets absorbed there due to a lack of magnetic field. Earth’s magnetic field prevents the solar Helium 3 from reaching the surface. Helium 3 is abundant in the moon’s soil by at least 13 parts per billion (ppb) by weight, according to NASA’s website.

India is not the first country to declare its intent to mine the lunar surface. Both Russia and China have plans to tap resources on the moon.

In fact, Russian company Energia aims to mine Helium 3 by 2020, while China’s is going to launch an unmanned lunar Chang’e 5 later this year, with the purpose to bring lunar soil with Helium 3 back to the Earth.

But is ISRO's plan realistic despite the Indian space agency's recent achievements such as sending more than 100 satellites at one go? Experts say it is not unrealistic but will require serious efforts and investments.

"ISRO's 2030 target at present looks very realistic considering no other country has been able to meet their own deadlines. No country has been able to launch a manned mission to the moon after the Apollo missions. But, ultimately, everything depends on how the technology evolves and is implemented. And here we are talking about sending manned or unmanned spacecraft to the moon, mining lunar surface and bringing the soil back to the country and processing it for energy production in a cost-effective manner," Group Capt. Ajey Lele (Retd), Senior Fellow, Institute for Defence Studies and Analyses told Sputnik.