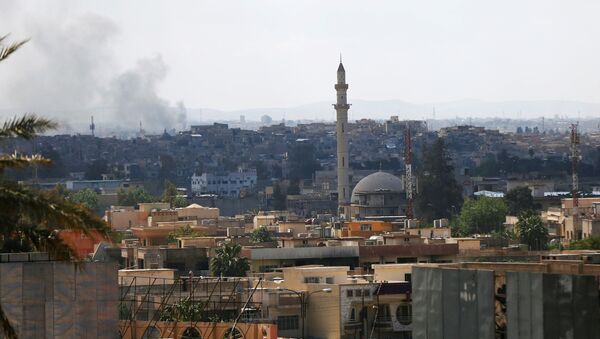 WASHINGTON (Sputnik) — The US-led coalition is probing the chemical agent used by Daesh in the Iraqi city of Mosul on April 16, Operation Inherent Resolve land force component commander Joseph Martin said in a briefing on Wednesday.

"Daesh has used chemicals in the vicinity of Mosul," Martin told reporters. "We are not certain at this time exactly what the agent is…We are still waiting on the outcome of that testing."

The commander explained that the Iraqi Security Forces (ISF) were in the vicinity of one of the strikes loaded with what is likely a low-grade chemical agent, and received appropriate level of medical care after the attack.

Martin noted that the chemicals have had no significant impact on the ISF.

"They had no impact on our forces," he added. "Nobody has been impacted significantly by this."

The commander declined to clarify, however, whether the coalition forces were at the site of the incident during the strike or if they arrived in the area to provide medical assistance to the ISF.

"We are forward with the Iraqis. We share the same risk they do," Martin said. "With that risk there is danger, but our soldiers are prepared with the appropriate equipment."

The commander noted that allied forces operating in Mosul have appropriate equipment that can be used in case of a chemical weapons attack.

"I will tell you that every one of our coalition mates has the equipment they need to operate in a contaminated environment," Martin told reporters. "And they’ve got the training they need to do that as well."

US media reported on Tuesday that a 25-member Iraqi unit with US and Australian advisers suffered a chemical attack with mustard gas on Sunday.

Mosul Gas Attack: US Army Not Ready for Daesh Chemical Guerilla Warfare in Iraq
Martin declined to confirm media reports that US and Australian advisers had been exposed to chemical agents during recent clashes with Daesh.

Martin, however, did confirm that a chemical weapon had been used by Daesh in an area where Iraqi forces were present, but that no one was seriously injured.

It was not clear from Martin’s remarks whether local forces were also equipped with protective gear.

Military commanders issue Mission-Oriented Protective Postures (MOPP) depending on the chemical or biological threat. Only a MOPP at Level 4 would require soldiers to wear the mask plus complete protective suit.