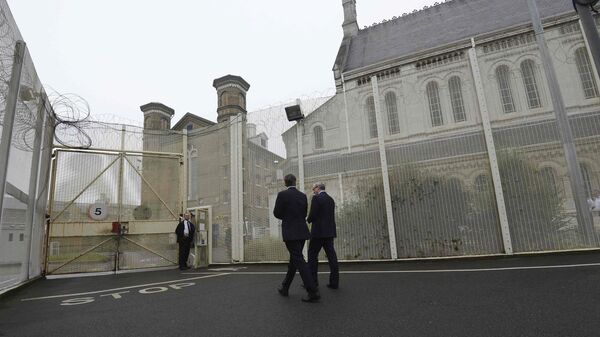 © AFP 2023 / POOL/PAUL HACKETT
Subscribe
International
India
Africa
The UK Ministry of Justice has defended itself in the face of a damning new report from the Council of Europe expresses deep concern about "severe generalized violence" in UK prisons and says that none of the prisons visited could be considered safe for prisoners or staff because of "chronic overcrowding", Sputnik has been told.

The report by the Council of Europe Committee for the Prevention of Torture (CPT) found that "chronic overcrowding in the UK prison system has a negative effect on many aspects of prison life, with a considerable number of prisoners spending up to 22 hours per day — and sometimes more — locked in their cells."

​The report expressed "deep concern about severe generalized violence" in a number of UK prisons and says that none of the prisons visited by the CPT delegation could be considered safe for prisoners or staff.

Inadequate safeguards to protect patients in mental health settings were also highlighted in the report, which makes a number of recommendations to the UK authorities.

"Injuries to both prisoners and staff, documented over a three-month period in the prisons visited, included multiple cases of scalding water being thrown over victims (resulting in severe burns over 10% of the victims' bodies), 'shank' (make-shift knife) wounds, head wounds, broken noses and broken teeth. Injuries frequently required hospitalization and, in one case, resulted in the death of an inmate," the report said.

​In response to a request from Sputnik, the UK Ministry of Justice said the inspection took place before the UK Justice Secretary announced new measures to help tackle violence in prisons and examined only three prisons in the UK: Cookham Wood Young Offender Institution (YOI), HMP &YOI Doncaster, HMP Pentonville.

"We have always been clear that we need to make our prisons safe so we offenders can turn their lives around and live as law-abiding citizens. That is why we have taken immediate action to stabilize the estate by tackling the issues that undermine security, and are investing US$128 million annually to boost the frontline by 2,500 officers," a Ministry of Justice spokesman said in a statement to Sputnik.

"These measures, along with the work to overhaul our prisons so they become places of reform, will help reduce crime, create fewer victims and safer communities."

According to the report, the situation was "particularly bleak" for juveniles placed on 'separation' lists, who could spend up to 23.5 hours a day locked up alone in their cells.

"In the CPT's view, holding juveniles in such conditions amounts to inhuman and degrading treatment. Findings and data show that juvenile offenders in YOIs have been held alone in conditions akin to solitary confinement for periods of 30 days, 60 days and even, occasionally, up to 80 days."

"The CPT recommends that juveniles should not be segregated in such conditions, even for the purposes of good order, and instead be placed in small staff-intensive units," the report said.