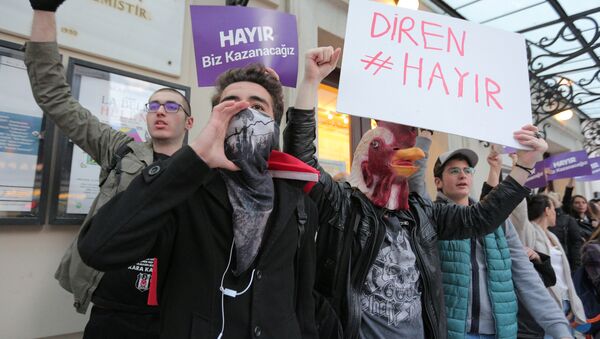 © REUTERS / Kemal Aslan
Subscribe
The opposition Republican People's Party's deputy chair said that opposition believes that the extension of the country's state of emergency by Ankara is a deliberate attempt to silence objectors of and suppress protests against the outcome of Sunday's constitutional referendum on expanding presidential powers.

Nearly 50 People Detained in Turkish Protests Against Giving Erdogan More Powers
MOSCOW (Sputnik) – The Turkish opposition believes that the extension of the country's state of emergency by Ankara is a deliberate attempt to silence objectors of and suppress protests against the outcome of Sunday's constitutional referendum on expanding presidential powers, Ozturk Yilmaz, the opposition Republican People's Party's (CHP) deputy chair responsible for foreign relations, told Sputnik.

On Tuesday, the Turkish parliament approved the government's decision to extend the state of emergency in the country for additional three months. Ankara's move came after thousands of people took to the streets in Istanbul to protest against the citizens' approval of turning Turkey into presidential republic.

"The government is not using this state of emergency to be able to prevent any threat, but is using it mainly to be able to curb the freedom of expression, all freedom of assembly, to squeeze public and to dictate the result of the referendum because in the aftermath of the referendum there are already and could be more demonstrations, so they want to control," Yilmaz said.

He added that the state of emergency in the country was used by the government to secure favorable referendum result and to quash any possible resistance.

Yilmaz stressed that while CHP parliamentarians demonstrated their own resistance Tuesday by voting in the parliament against the extension of the state of emergency, their efforts had no effect, as the current composition of the parliament with the majority from the ruling Justice and Development Party (AKP) allows the government to pass any legislation.

The nationwide state of emergency, which gives considerable restrictive powers to the government for a period of three months, was introduced in Turkey after a failed coup attempt in July 2016 and has been extended three times since then. The most recent extension was due to expire on Wednesday.

The referendum on constitutional amendments that would expand the powers of President Recep Tayyip Erdogan was held in Turkey on Sunday, with 51.4 percent of voters supporting the proposed amendments. The newly bestowed presidential powers will allow Erdogan to take up the position as the head of the political party he represents, something which is not allowed under current legislation, and to stay in office for two more terms.

Erdogan called the results of the referendum a "historic decision" implementing one of the most important governance reforms in the country's history and stressed that the procedure was carried out with full respect for democratic principles.