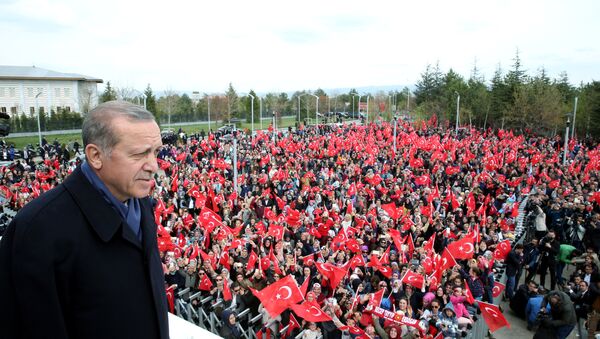 Turkish leader Recep Tayyip Erdogan's declaration of victory in Sunday's constitutional referendum to expand his presidential authority has been hailed by the Muslim communities in Serbia and neighboring Bosnia and Herzegovina. Political analysts and diplomats explained to Sputnik Serbia what they now expect from the Turkish leader.

New Balkan Crisis: How West 'Rewards Albanians for Servility of Macedonians'
On Sunday, President Tayyip Erdogan declared victory in a referendum to replace Turkey's parliamentary system with an all-powerful presidency and abolish the office of prime minister.

The results of the vote have been also hailed by Sulejman Ugljanin, the first and current president of the Bosniac National Council, a representative body of the Bosniak national minority in Serbia, who said that "any Erdogan's success is the success of Bosniaks of Sandžak" (Serbia's region, former Ottoman administrative district).

Sputnik Serbia discussed the issue with Serbian-American political analyst Srdja Trifkovic, who explained that since the very start of his political career, Erdogan has been supporting those in the Balkans whom he considered continuators of the so-called "Ottoman tradition."

It is also worth reminding that the Turkish leader earlier claimed that Bosnian politician Alija Izetbegović, the first President of the Republic of Bosnia and Herzegovina, who died in 2003, once said that he had "left Bosnia to Erdogan to take care of."

"The Muslims in Serbia and Bosnia do have reasons to welcome Erdogan's victory. They hope that after the referendum he will be more active in pursuing Turkish ambitions in the Balkans. I also think this will be the case as Erdogan is no longer bound with any obligations to the EU and the US. Their relations have soured after the failed coup attempt," the political analyst said.

Tougher Times Ahead? How Turkey's Foreign Policy Could Change After Referendum
He also suggested that there might be continuation of what is being called a "NeoOttoman strategy of Ankara", which is being pursued in three directions: Caucasian, Middle Eastern and  the Balkan.

"We should also expect greetings coming from Kosovo, Albania and western Macedonia. There is no doubt that Erdogan considers the Albanians his key allies and partners in strengthening Turkish strategic presence in the region," Trifkovic concluded.

Former Serbian diplomat Srecko Djukic however has a different point of view. He told Sputnik Serbia that Erdogan will most likely deal with his national issues first.

"I think we should wait and see whether Turkey will have enough power to get closer with the Balkan countries. Turkey is likely to face lots of challenges as its economic situation is different now. And I don't think that Ankara will expand its presence in the Balkans in the nearest future," he suggested.