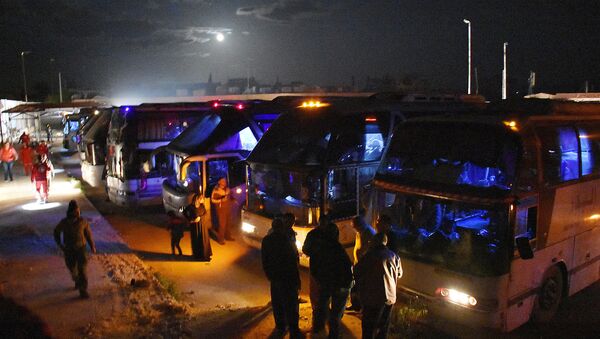 The last group of militants has left the Syrian town of al-Zabadani in the western countryside of Damascus and the settlement has come under control of the government troops, a source familiar with the matter told Sputnik on Wednesday.

BEIRUT (Sputnik) — In March, the Syrian authorities reached an agreement with the country's opposition groups on evacuation of militants and their families from the settlements of Madaya and al-Zabadani to Idlib in exchange for evacuation of civilians from the Shia towns of Fua and Kefraya. The evacuation started on Friday.

"Al-Zabadani has been liberated from terrorists. The last column with militants set off for Idlib," the source said.

The Syrian state has been hit by a civil war for more than six years. Within the framework of the armed conflict different social and religious groups have clashed and became involved in the warfare. Shia populated Fua and Kefraya, have been besieged by militants for several years.