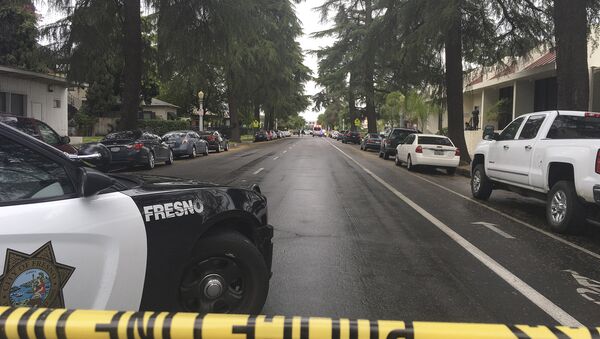 The gunman shouted "Allahu Akbar" as he opened fire, according to Fresno police chief Jerry Dyer. He is now in police custody.

The suspect is 39-year-old Kori Ali Muhammad. In addition to these three counts of murder, Muhammad is being charged with two counts of attempted murder and a fourth count for the fatal shooting of security guard in Fresno on Sunday.

​Of the three victims, one died instantly while another two was rushed to the hospital and a third to the Fresno Police Department headquarters. At least one of the victims was a utility worker with Pacific Gas and Electric Company (PG&E), a major California energy provider. Another person was shot at but not injured.

​The gunman's weapon was a large handgun, possibly a revolver. Eyewitnesses reported that he paused to reload at least once.

​The shootings occurred in three different places: in front of a Catholic Church charity, the front yard of a residential home, and a bus stop. All four victims were white males, and Dyer claims that Muhammad has a hatred for white people.

​Dyer called the crime a "random act of violence." He also said that it was "too early" to call the crime an act of terrorism, but the suspect shouting "Allahu Akbar" indicates just that.