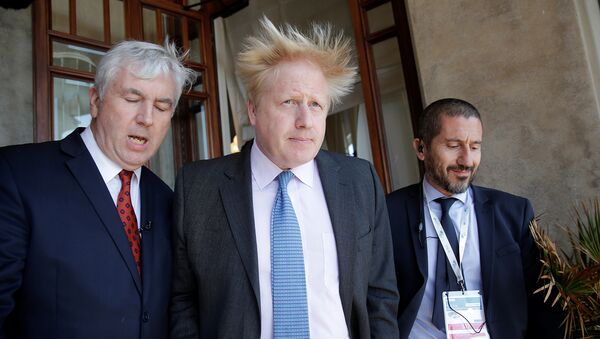 This is Why Cancellation of Johnson's Visit to Moscow ‘Was Predictable'
RIA Novosti quoted Konstantin Kosachev, head of the Russian Upper House's Foreign Affairs Committee, as saying that British Foreign Secretary Boris Johnson's request that Russia join the international coalition's efforts to fight Daesh terrorists shows that he is out of step with the reality.

In his recent article published by The Telegraph, Johnson offered Russia "to join a coalition of more than 60 countries in the fight against Daesh," which he said is "a chance to end the Syria crisis."

Referring to Russia, Johnson said that "they still have time to be on the right side of the argument."

Commenting on his remarks, Kosachev suggested that the British Foreign Minister "is apparently not informed about the latest events in Syria."

"Otherwise, he would know that Russia is among the very few countries in the world that really help Syria cope with the terrorist disaster," Kosachev said.

On the other hand, Johnson may deliberately turn a blind eye to the reports about the situation in Syria because "it's so nice to be under the illusion that your country is part of the 'right' coalition which influences the world's future," according to Kosachev.

"One way or another, Johnson's call remains in the air," Kosachev said, blaming the UK Foreign Secretary for being out of sync with reality, "at least in the Middle East."

He was echoed by Franz Klintsevich, first deputy head of the Russian Upper House's Committee on Defense and Security, who questioned the international coalition's determination to contain Daesh.

"I don't think that joining the Western coalition, which just pretends to be fighting Daesh, would be the right choice. As one famous Russian film goes: no, we'd rather welcome you," Klintsevich was quoted by RIA Novosti as saying.

On April 6, the United States launched 59 Tomahawk cruise missiles at the military airfield in Ash Sha'irat. US President Trump said the attack was a response to the alleged chemical weapons used in Syria's Idlib province on April 4, which resulted in the death of over 80 people. The strikes were unanimously supported by NATO member-states.

Johnson Finds Himself in Isolation After Demanding New Sanctions Against Russia
Earlier this year, Syrian President Bashar Assad said that the country's government had never used weapons of mass destruction, including chemical weapons, against the Syrian people.

Under a Russian-US deal after the east Ghouta sarin gas incident in 2013, Damascus joined the Convention on the Prohibition of Chemical Weapons and agreed to destroy its stockpile under the oversight of the Organization for the Prohibition of Chemical Weapons (OPCW), which announced in January 2016 that all chemical weapons in Syria had been destroyed.