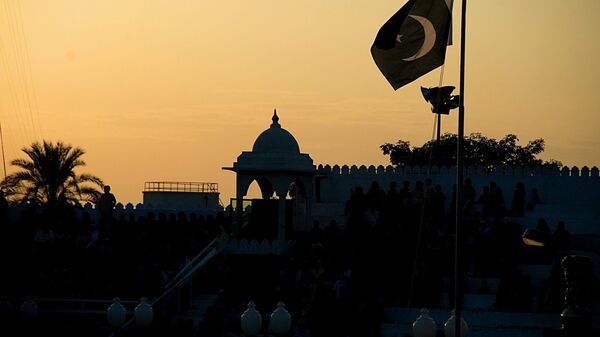 Pakistan's deputy foreign minister commented on the Islamabad-Moscow ties and Washington's possible role in mediating the relations with New Delhi.

MOSCOW (Sputnik) — Cooperation between Russia and Pakistan is important to insure stability and security in Central Asia, Pakistani Deputy Foreign Minister Tasnim Aslam told Sputnik following her visit to Moscow, where on March 14 she participated in the fifth multinational Afghanistan peace conference and held meetings in the Russian Foreign Ministry.

"I met the director of the Russian Foreign Ministry's Second Asian Department Zamir Kabulov and Deputy Foreign Minister Sergei Ryabkov while in Moscow. We had very positive and very substantive discussions. We are always happy to exchange views with Russia on the reconciliation and stabilization efforts in Afghanistan as it is in our mutual interest, because we are immediate neighbors of Afghanistan. Therefore, our cooperation, apart from our economic relations and political engagement, is also very important in the regional and global settings," Aslam said.

The Pakistani official added that one of the biggest threats to Central Asia was the concentration of terrorists in the region. Another problem, according to Aslam, was drug trafficking.

"Afghanistan is the highest drug producer in the world… It is only logical that the Central Asian states should be at the table to discuss the future in Afghanistan and reconciliation there," Aslam added.

According to Aslam, Moscow and Islamabad are working together toward multidimensional and meaningful relations in all spheres, including economic cooperation, political dialogue and coordination of efforts in the international arena.

"We have relationships, which are very forward looking. There are a large number of issues across the spectrum on which we hold similar positions, we cooperate in the UN, our economic relations and our political engagements are getting stronger. We would like to see these relations expanding and gaining further strength," Aslam said.

Pakistan Urges Restraint Amid US Strikes in Syria Over Idlib Incident
Afghanistan is in a state of political and social turmoil, with government forces fighting the continuing Taliban insurgency. The instability has persisted in the country since the 2001 US-led invasion to defeat the Taliban and al-Qaeda in the wake of the 9/11 attacks in the United States.

Pakistan favors the United States as a mediator when it comes the country's role in the deescalation of tensions between India and Pakistan, Aslam told Sputnik, commenting on US ambassador to the UN Nikki Haley’s recent remarks about a potential "pro-active" engagement of Washington in India-Pakistan affairs.

On April 4, after the United States assumed the presidency of the United Nations Security Council for the month of April, Nikki Haley told reporters that Washington was concerned about the India-Pakistan dispute, noting that the administration of US President Donald Trump could contribute toward efforts on reducing the heightened tensions. The suggestion was rejected by New Delhi, which insisted on bilateral negotiations on all India-Pakistan issues.

"We welcome any efforts, which are aimed at defusing the tension in the region. If the US is willing and committed to play this role, or any country, or the United Nations, we welcome that," Aslam said.

The Pakistani official stated that she was, however, cautiously optimistic of Haley’s remark, as the previous US administration had failed to fulfill similar promises to help reduce tensions between the two neighboring states.

"We have heard also from the previous US administration that they wanted to try and mediate somehow, deescalate and promote dialogue. There haven't been any practical manifestations of that or any practical steps," Aslam said.

She continued to state that the deescalation of the conflict alone was not sufficient, stressing the urgency to address and find solutions to more crucial issues, such as the human rights violations in the India's northern state of Jammu and Kashmir, which, according to Aslam, have been left unchecked by the international community.

"Just deescalation of the conflict is not sufficient. There is a need also to promote a meaningful, result-oriented, sustainable dialogue to resolve the underlining issues. The human rights situation in the Indian occupied Kashmir has to be addressed. India feels encouraged and ramps-up human rights violations, which remain unnoticed or the international community choose to ignore them," Aslam stressed.

India Rejects Any US Mediation in India-Pakistan Relations
The Jammu and Kashmir state has been a territory disputed by India and Pakistan since 1947. The two countries have gone through three wars over the region, but without having the conflict ever resolved. In 1993, 26 political, social and religious organizations in India formed the All Parties Hurriyat Conference (APHC), an alliance aimed at establishing the independence of the region.