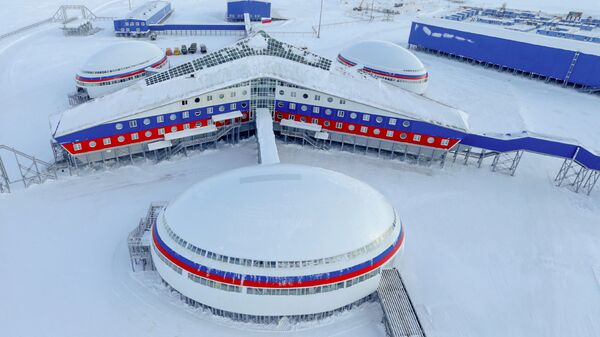 The Russian Defense Ministry's website has for the first time launched an interactive excursion around Russia's unique Arctic Trefoil military base.

Masters of the Arctic: Russia to Permanently Station Submarines in Icy North
Internet users can now, for the first time, take a 3D tour of Russia's state-of-the-art Arctic Trefoil military base, a project launched by the Russian Defense Ministry's website, according to RIA Novosti.

The four-story base is located on Alexandra Land Island in the Franz Josef Archipelago in the Arctic region.

The infrastructure includes a number of special purpose facilities, control posts, garages for military and special equipment, an autonomous power unit, as well as specialized warehouses and storage facilities.

The 3D tour of the Arctic Trefoil base, in particular, shows rooms for servicemen, an officer's canteen, a gym, a movie house, an atrium, a library, a greenhouse and a medical unit," the Russian Defense Ministry's press release said.

"A completely autonomous base, the Arctic Trefoil can provide comfortable living for up to 150 servicemen for 1.5 years," according to the English version of the Russian Defense Ministry's website.

In an interview with Sputnik, Russian military expert Viktor Litovkin said that the Arctic Trefoil base helps Russia deal with at least three key tasks.

"Russia deploying its bases on the islands and archipelagos of the Arctic Ocean is among other things aimed at taking control of the Northern Sea Route. Apart from controlling, we also ensure the navigation of merchant ships and icebreakers en route from Asia to Europe," he said.

"Secondly, we provide security to our oil and gas in the Arctic Ocean's water zone," he noted.

"Last but not least, we protect our country from being threatened by foreign ships equipped with missile defense systems and strategic missiles in the Arctic Ocean. This Russian region is quite vulnerable from a security point of view, so the Arctic Trefoil helps defend our country," Litovchenko completed.