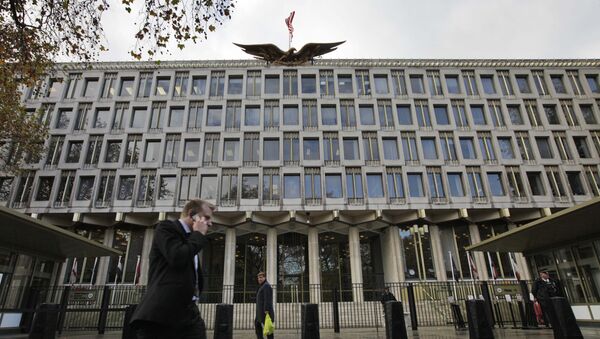 The US embassy in London has become the butt of internet jokes after staff there interviewed a three-month-old baby on suspicion of terrorism.

Young Harvey Kenyon-Cairns had been due to fly to Orlando, Florida with his parents and grandparents. His grandfather Paul Kenyon filled out his ESTA visa waiver application form, but made a mistake.

When he got the question of the form which asks, "Do you seek to engage in or have you ever engaged in terrorist activities, espionage, sabotage, or genocide?" Kenyon ticked yes instead of no.

As a result, Harvey, his mother Kaye and his grandfather Paul traveled with him on a ten-hour round trip from their home in Poynton, Cheshire, to the embassy in London's Grosvenor Square.

Leaving His Mark on History, Tourist Carves Name Into Roman Colosseum
Harvey, who isn't talking yet, passed the interview and was eventually given permission to travel to the US. However, he wasn't given the all-clear in time to travel with the rest of the family and Kenyon ended up having to pay an extra £3,000 ($3,767) to re-book tickets for Harvey and his parents.

Hearing about Harvey's story, users of social networks were astonished that the embassy required him to visit in person for the interview, despite being aware that he is just three months old and obviously incapable of terrorism.

His grandfather joked that Harvey "has sabotaged quite a few nappies in his time."

#ESTA seems to have worked and managed to find a terrorist: https://t.co/ptv0M2wFc6

​​​"Baby Harvey was good as gold for the interview and never cried once. I thought about taking him along in an orange jumpsuit, but thought better of it," Kenyon told the Guardian.

Others agreed with a point made by the child's grandfather Paul Kenyon and criticized the inclusion of a question asking whether the visitor had ever engaged in terrorism.

"If you were a terrorist, I suspect you’d not be ticking yes on the ESTA form anyway," the baby's grandfather added.

Why does the US even ask if you’re going to be a terrorist? No good can come of that question, ever. https://t.co/OVIEZgjaKv

Its just ridiculous that the US embassy forms have questions asking visa applicants whether they seek to engage in terrorism, genocide… https://t.co/AAot8SmUzK