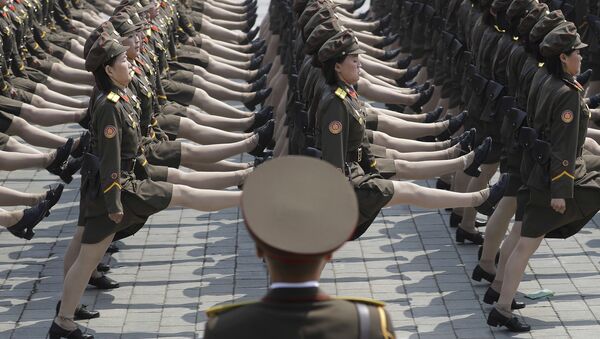 Trump's National Security Adviser Says All Options on the Table for North Korea
Earlier this week, US President Donald Trump pledged to "take care of" the North Korean "problem." The North Korean military responded by pledging to launch a "preemptive strike" in the event of any "US provocation," as well as to target US bases in South Korea, Japan and the USS Carl Vinson.

However, earlier on Sunday, Pyongyang supposedly launched an unidentified projectile, but the test appeared to have failed. South Korea's Joint Chiefs of Staff (JCS) stated that the attempted launch was conducted from the area near North Korea's eastern port city of Sinpo, but likely ended in failure.

Speaking to Radio Sputnik, Igor Korotchenko, a Russian military expert and editor of "National Defense" magazine, said that an extremely dangerous situation may unfold on the Korean Peninsula and it will be Washington's fault.

"It is possible that Kim Jong Un has a special team, the goal and the task of which is to retaliate in the event of an aggression against North Korea. For example, it is possible that one or two nuclear warheads could be loaded on a submarine and then this sub will head either toward the coast of South Korea, the United States or to the Japanese coast, where nuclear action can be carried out. It is a terrible scenario, all this puts the world to the brink of World War III," Korotchenko said.

According to the military expert, in this event, the situation could be even worse than the Cuban missile crisis in 1962. He said that it should not be allowed.

"North Korea's regime is certainly far from the norms of Western democracy, but its [Pyongyang's] logic can also be understood. They are not fools. They have only one goal — they want everyone to leave them alone. But when such a naval armada is ready for a possible strike, it is impossible to predict the next actions of the North Korean leadership. Let us assume that North Korea is going to use nuclear weapons against the US Tomahawks [cruise missiles]. If such a situation unfolds, it means that the US will start a nuclear war, to retaliate. Therefore, the situation may be worse than during the 1962 Caribbean crisis. And Trump should understand that the stakes in the game, which he had started, might be simply disastrous due to their catastrophic consequences and that should not be allowed in any case," he concluded.