Get Your Stealth On: Serbia Looks to Russia, Belarus to Buy S-300 AA System 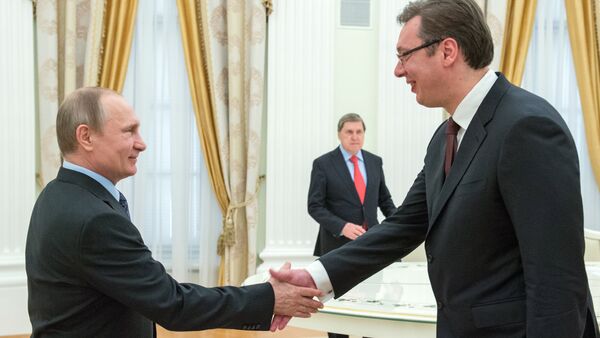 © Sputnik / Sergey Guneev
/
Go to the photo bank
Subscribe
Serbia is looking to purchase two divisions of Russian S-300 anti-air systems, according to Serbian President Aleksandar Vucic. Belgrade may make the buy from either Russia or from Belarus.

"For us it would be vital to have two (S-300) divisions and one regimental command post, which would be a solution for us for many years to come," he said, adding that no agreement has been reached yet.

Vucic, who was elected on April 2, last visited Belarus' capital, Minsk, in late January, and was in Moscow in December, when he still was Serbia's prime minister.

Vucic commented on rumors that Russia allegedly sold S-300 to Croatia, Serbia's one-time rival in the Yugoslavian war, despite a UN embargo, that was imposed in 1991 and "indefinitely" suspended in 1995.

"We have no information that Croatia is in possession of the S-300. Generally, one can't hide such a thing, it's not a needle," Vucic said.

The report, originally published in Croatia's Vecernji List newspaper, has been denied by Russia. Earlier this week, Moscow slammed the article as "provocative, twisting the facts, and aimed at smearing Russian politics in the Balkans."

"Russia has always followed its international legal obligations, including those under the embargo regime on arms supply for the conflicting parties of the Yugoslav crisis in 1991-1995," said Artem Kozhin, deputy director of the Russian Foreign Ministry's Department of Information and Press.

In 1999, Yugoslav forces shot down then state-of-the-art aircraft, the F-117 Nighthawk, that had been advertised as "invisible" to anti-aircraft systems, using an obsolete Soviet-built S-125 anti-air system, a predecessor to the S-300. This effectively marked the death of the F-117, which has since been substituted by the F-22.

000000
Popular comments
THIS is NATO paid. They want a model to practice. Serbia made CLEAR it will join E.U /NATO. THE RIGHT CHOICE according to E.U. Don't give NOTHING to them. Don't waste your cash. IF they join EEU , CSTO they can have ..FREE.
cast235
17 April 2017, 02:29 GMT2
000000
The Croatian Nazi regime has obviously no such thing but since the US just finalized the encirclement of Serbia with hostile NATO states, S-300 could be crucial for its defences should NATO threaten it again. Problem is to get them there as Serbia as such is landlocked.