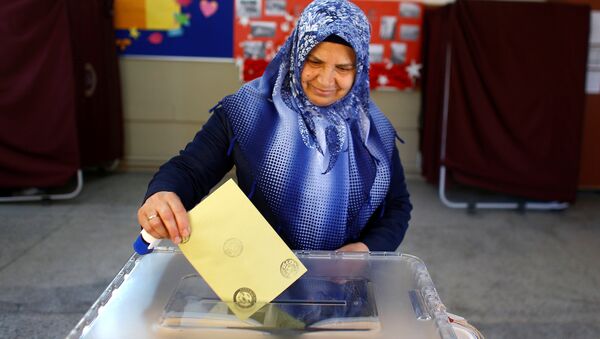 The referendum on constitutional changes in Turkey, stipulating expansion of the presidential powers, is ongoing in a relatively peaceful atmosphere, a Sputnik correspondent reported on Sunday.

Two People Killed in Shooting in Turkish Diyarbakir Province During Referendum
ANKARA (Sputnik) — About 55.3 million of voters are expected to cast their votes at 167,140 polling stations, with 461 additional ballot stations operating in prisons. Turkish citizens living abroad have voted on the constitutional amendments before the voting day.

The voting started at 7 a.m. local time (04:00 GMT) in the eastern Turkey and at 8 a.m. in the rest part of the country. Security at the polling stations is maintained by 380,000 policemen. No serious violations have been registered so far, except for an incident in the south-eastern province of Diyarbakir, where two people were killed in a shooting near a polling station.

The press service of pro-Kurdish Turkish People’s Democratic Party (HDP) told Sputnik that its jailed leaders Selahattin Demirtas and Figen Yuksekdag were also expected to take part in the voting.