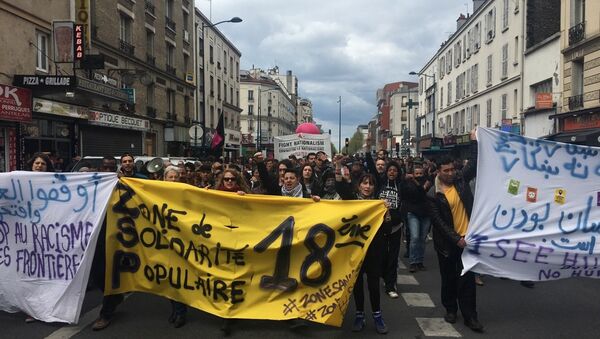 Hundreds activists took to the streets of Paris on Sunday to voice their protest against presidential candidate Marine Le Pen, media reported.

MOSCOW (Sputnik) — Hundreds of anti-fascist activists took to the streets of Paris on Sunday to voice protest against presidential candidate Marine Le Pen, the leader of far-right National Front Party, one day ahead of her election rally in the French capital, media reported.

Some of demonstrators were throwing flares and smoke bombs, while others were holding up banners and shouting antifascist slogans, the RT broadcaster reported.

​The protests were taking place in the Paris’ northeastern neighborhood of Aubervilliers. The demonstrations were scheduled to go past the office of Paris’ mayor, according to the broadcaster.

Earlier on Thursday, the building which houses the Le Pen campaign headquarters was hit by an arson attempt, which was reportedly carried out by an extreme left wing group.

The first round of French election is set to take place on April 23, while the run-off is scheduled for May 7. National Front leader Le Pen and independent candidate Emmanuel Macron are the favorites in the presidential race.