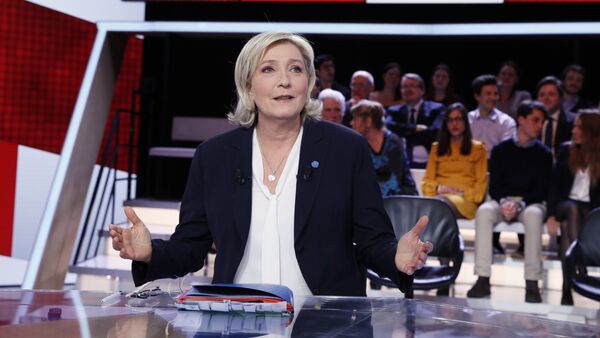 As the prospects of the European Union's future appear to be obscure after Brexit, German President Frank-Walter Steinmeier has called on the French people not to vote for the far-right candidate Marine Le Pen in the upcoming presidential election, as the latter during her campaign raised the possibility that France leaves the bloc.

MOSCOW (Sputnik) — Steinmeier has warned on Saturday the French citizens against supporting Le Pen at the presidential election, who vows to renegotiation the pillars of the EU system, quit the Schengen zone and restore national borders.

"Do not listen to the siren songs of those who promise you a great French future after getting rid of all that is part of France today, namely its role as a guarantor of European stability and a pillar of the European Union," Steinmeier said in an interview with the Ouest-France newspaper, referring to Le Pen's political pledges.

The European Union remains an asset for all Europeans despite the existing problems within the union and such challenges as Brexit, Steinmeier stressed, adding that it was possible to make Europe a really significant player in the world only by cooperating.

Failure of EU Project: 'The Sooner France Gets Out - the Better'
"Maybe if we had talked more about the problems and risks involved, we would have avoided some setbacks. Nevertheless, despite all the difficulties, the European Union remains an asset for all Europeans,"he said. "The EU might be complicated sometimes but it an asset for all of us, including France," he added.

The first round of French election is set to take place on April 23, while the run-off is scheduled for May 7. National Front leader Le Pen and independent candidate Emmanuel Macron are the main favorites of the presidential race. According to the recent polls, Le Pen keeps a one-percent lead over Macron.