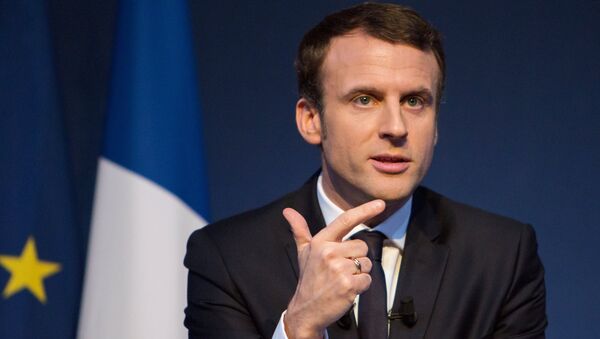 MOSCOW (Sputnik), Anastasia Dmitrieva — They also noticed that the public trust for two other top candidates decreased due to financial scandals surrounding them.

"Francois Fillon and Marine Le Pen are involved in scandals and it’s a major concern because French citizens are disappointed with politics by these scandals. It decreases trust of citizens in their politicians, so it decreases the legitimacy of politicians, of whoever is in power and it decreases their political capital that is very much needed to reform the country and to coordinate people," Vincent Pons, Assistant Professor at Harvard Business School, said.

As Fillon is suspected of employing his wife as his parliamentary assistant without fulfilling any official duties and Marine Le Pen accused of misusing about $322,000 of EU allowances to pay two European Parliament assistants for carrying out non-legislative tasks, France faces several economic reforms needed to be introduced.

"We are in a situation in which the labor is not fully employed, industrial capacity is not fully used and there is a need for the state to coordinate people to make them optimistic again, so the economy can florish again," Pons explained.

The French expert also argued that, while decreasing payroll taxes would help fighting unemployment, reducing public spending, as proposed by Macron, should not be top-priority in the short term.

"Clearly there are a number of reforms that are needed in France, but I wouldn’t start with this. I would start with a stimulus plan to stimulate the French economy, perhaps also demand a change in European fiscal and monetary policy, because cutting public spending is costly for people," Pons proposed, explaining that Macron’s plan would probably meet a lot of resistance from the French, whose purchasing power has not increased in the last decade.

His view was mirrored by another expert from the London School of Economics (LSE) and Political Science, who argued that the economic future of France depended entirely on its relations with Germany.

"On the whole, the economic future of France is not decided in Paris but in Berlin. If Paris can persuade Berlin to adopt a more expansive fiscal policy and do the same, things might begin to look up," Bob Hancke, LSE Associate Professor of Political Economy, said.

Meanwhile, Joachim Bitterlich, who was European Affairs Advisor to former German Chancellor Helmut Kohl for over a decade and Germany’s Permanent Representative to NATO, advised the future French leadership to introduce social capitalism to speed up economic growth.

"What France needs is the introduction of the ‘social market economy’ — joke apart, France has excellent economic actors, excellent research, excellent workers — it is the state and its oversized system who is the core of the problem! France needs urgent its adaptation to our time after a standstill of more than twenty years," Bitterlich, who is currently professor at the ESCP Europe business school in Paris, argued.

"A sensitive part of voters is taking, perhaps even accepting the scandals around the candidate of LR [The Republicans] as a ‘normal’ mark of the political system, the other part is looking for a fresh candidate — the only one in the race is for many people Emmanuel Macron," Bitterlich explained.

Similarly, Pons pointed out that Macron is being perceived as "a new type of politician" due to not being involved in any scandals, which explains his strong positions in the opinion polls.

"Macron is the favorite to win the elections. He’s been working in politics only a few years. But he was the minister of economy and his experience [as a former investment banker at Rothschild & Cie Banque] from the private sector is certainly an asset, because he has experience unlike other candidates who are professional politicians," the French academic said.

France's Exit of Euro May Lead to Dramatic Consequences

Macron, Le Pen Running Neck-And-Neck in 1st Round of French Elections
Meanwhile, Le Pen’s plan to return to the franc raises questions of whether the euro was a good idea for France and being part of the European Union has benefitted the country or it was worth undertaking a costly exit of the common monetary zone.

'Part of Pre-Election Context': Marine Le Pen's Aide on Request to Lift Immunity
He explained that it was hard to anticipate the consequences of France exiting the European Union, because unlike the United Kingdom it would also have to exit the euro, but there were a number of scenarios in which the consequences would be quite dramatic.

"The risk with exiting the euro is that if France did exit the euro and went back to the franc, there would be expectation of the devaluation of the franc and the people with savings in the French banks will be very quick to transfer this money to banks outside of France not to have their wealth be deflated by the devaluation," the Harvard scholar said.

The same scenario was predicted by the LSE associate professor, who emphasized that the bloc would take an even harder stance with France than in relations with the United Kingdom.

"If Brexit, a relatively amicable divorce, is a big and costly mess, imagine what would happen in a bitter divorce. The franc will immediately devalue by 25-40%, probably dragging Italy along," Hancke warned.

As France’s total exports and imports amounted to 61 percent of GDP, it made no sense for the country to retreat from trading with European partners, which could hurt the French economy quite significantly, Pons argued.

"France has benefitted from strong economic partnership with Germany, so moving away from this logic towards protectionism would be very hurtful," the French expert noted.

Moreover, the Front National candidate’s economic plan would fail to increase the purchasing power of the French citizens which has been stalled for years.

"Le Pen’s whole economic programme is not realistic at all, it is neither coherent nor it makes economically any sense. It is just destructive and would lead France to a more than serious setback, if not to bankruptcy," Joachim Bitterlich concluded.