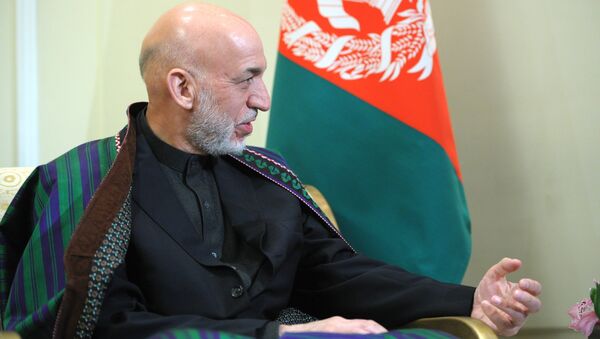 © Sputnik / Alexei Druzhinin
/
Go to the photo bank
Subscribe
Former Afghanistan's President Hamid Karzai has vowed on Saturday to increase efforts aimed at withdrawing US military forces from the country, following the US bomb strike on Afghan Nangarhar province.

Russia Not Going to Use Armed Forces in Afghanistan Amid US MOAB Strike
MOSCOW (Sputnik) — On Thursday, US military aircraft dropped the 22,000-pound MOAB, nicknamed the "Mother of All Bombs" in Afghanistan’s Nangarhar province to destroy a system of underground tunnels and caves in the region, thought to be used by terrorists. According to Nangarhar officials, the bomb killed at least 94 terrorists including four senior Daesh commanders.

According to Khaama Press, Karzai criticized the Afghan government for allowing the US forces to carry out the strike, raising at the same time questions about suddenly intensified US attacks on terrorist positions.

The former Afghan leader stressed that use of the MOAB was an insult to the country.

Afghanistan has been experiencing significant political, social and security-related instability for decades, as terrorist organizations, including the Taliban and the Islamic State, both outlawed in Russia, continue to stage attacks against civilian and military targets.