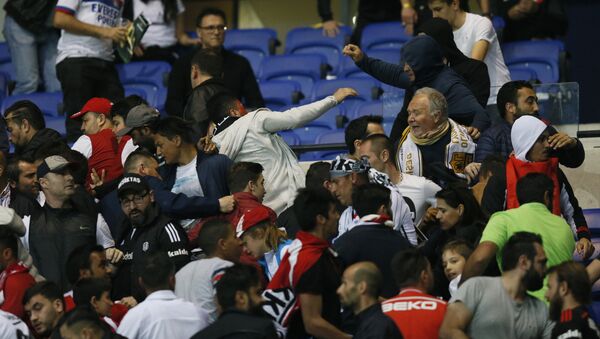 The Union of European Football Associations (UEFA) has opened disciplinary proceedings against French Olympique Lyonnais football club and Turkish Besiktas JK over the violence that flared up during the UEFA Europa League quarter-final match in Lyon, UEFA said in a statement Friday.

MOSCOW (Sputnik) — On April 13, the match between Lyon and Besiktas (2-1) was delayed by 45 minutes due to the clashes and unrest among the football fans.

“Disciplinary proceedings have been opened following the UEFA Europa League quarter-final match between Olympique Lyonnais and Beşiktaş JK (2-1), played on 13 April in France,” the statement read.

Mainstream Media Prefers to Overlook Punches Non-Russian Footies Throw
The Lyon club was charged with setting off of fireworks by fans, insufficient organization and field invasion by supporters, among other charges.

The Besiktas was also charged with setting off of fireworks as well as with throwing of objects by supporters and crowd disturbances.