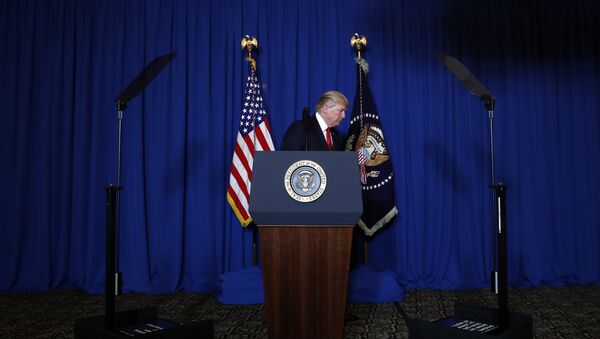 The US President said that finally there will be "lasting peace" in Russia-US relations.

"Things will work out fine between the U.S.A. and Russia. At the right time everyone will come to their senses & there will be lasting peace!" Trump wrote on Twitter.

Things will work out fine between the U.S.A. and Russia. At the right time everyone will come to their senses & there will be lasting peace!

Trump Hopes 'Things Will Work Out Fine' Between Russia and US
"I think he had a very successful meeting in Russia. We'll see, we'll see the end result, which will be in a long period of time perhaps. But the end result is what's most important, not just talk," Trump said Wednesday during a joint press briefing with NATO Secretary General Jens Stoltenberg.

However, he underscored that the US at present "does not get along with Russia at all."

Trump also said it would be fantastic to improve US relations with Russia as well as with many other countries in order to stabilize the situation around the world.

Washington and Moscow have exchanged a series of mutual blames after the Pentagon launched a missile attack on a Syrian airbase on April 7. The White House said the move was in response to the reported chemical weapons use in Idlib on April 4. The US and many its allies have blamed Damascus for the incident.

Tillerson Failed to Defuse Dangerous US-Russia Tensions in Moscow Visit
Moscow has called for an objective investigation into the Idlib incident and described the US missile strike as an act of aggression.

In an interview with Radio Sputnik, Dmitry Mikheyev, a political analyst and specialist in US politics, suggested that the US presidential administration lacks experts and advisors on Russia to elaborate its foreign policy strategy.

"With all Trump’s actions and statements, it is clear that he has not yet formed the foreign policy team in the State Department. This means there are no specialists on Russia who would offer recommendations. Trump and Tillerson have no experience in the field. Tillerson’s visit to Moscow was expected to facilitate the development of Trump’s foreign policy strategy," Mikheyev pointed out.

The expert said that currently it is difficult for Trump to "designate the scope for maneuvering" because his domestic positions are weak.

"Some forces [in Washington] are openly trying to sabotage his presidency. This is why Trump cannot find specialists for the State Department. He doesn’t know who he can trust," Mikheyev said.

000000
Popular comments
Why does Russian media continue to be the PUblic Relations wing for Trump? It is clear as day Trump Is against Russia and the Russian media honeymoon and flirting with Trump must end at once. There was no sabotage, he is not your ally.
Jerusalem
14 April 2017, 15:13 GMT1
000000
Illusions, illusions, illusions. We all know that the American president can not change anything that the deep state want, and they want a subservient Russia and the rest of the word. This is about power sharing and domination strangle.
giorgoskaz11
14 April 2017, 16:40 GMT1
000000
Newsfeed
0
New firstOld first
loader
LIVE
Заголовок открываемого материала
Access to the chat has been blocked for violating the rules . You will be able to participate again through:∞. If you do not agree with the blocking, please use the feedback form
The discussion is closed. You can participate in the discussion within 24 hours after the publication of the article.
To participate in the discussion
log in or register
loader
Chats
Заголовок открываемого материала
Worldwide
InternationalEnglishEnglishMundoEspañolSpanish
Europe
DeutschlandDeutschGermanFranceFrançaisFrenchΕλλάδαΕλληνικάGreekItaliaItalianoItalianČeská republikaČeštinaCzechPolskaPolskiPolishСрбиjаСрпскиSerbianLatvijaLatviešuLatvianLietuvaLietuviųLithuanianMoldovaMoldoveneascăMoldavianБеларусьБеларускiBelarusian
Transcaucasia
ԱրմենիաՀայերենArmenianАҧсныАҧсышәалаAbkhazХуссар ИрыстонИронауОssetianსაქართველოქართულიGeorgianAzərbaycanАzərbaycancaAzerbaijani
Middle East
Sputnik عربيArabicArabicTürkiyeTürkçeTurkishSputnik ایرانPersianPersianSputnik افغانستانDariDari
Central Asia
ҚазақстанҚазақ тіліKazakhКыргызстанКыргызчаKyrgyzOʻzbekistonЎзбекчаUzbekТоҷикистонТоҷикӣTajik
East & Southeast Asia
Việt NamTiếng ViệtVietnamese日本日本語Japanese俄罗斯卫星通讯社中文（简体）Chinese (simplified)俄罗斯卫星通讯社中文（繁体）Chinese (traditional)
South America
BrasilPortuguêsPortuguese
NewsfeedBreaking
02:41 GMT‘Duty of Care’: Texas Doctor Performs Abortion Past 6-Week Law to Protest State’s ‘Heartbeat Bill’
02:02 GMT'Get Off Back Foot': Prince Andrew Mulls Dismissing His Legal Team Over Reputational Damage - Report
01:48 GMTCheck Out Winners of 73rd Emmy Awards
00:53 GMTWHO Appoints Former UK Prime Minister Gordon Brown as Health Financing Ambassador
00:45 GMTIran Says Ready to Sell Fuel to Lebanese Gov't After Hezbollah Secured Emergency Supplies - Report
00:38 GMTVideos: Volcano Eruption on Spanish Island of La Palma Forces 5,000 to Evacuate
00:25 GMTNetanyahu on Facebook Mocks Biden’s Alleged Nap During Talks With Israeli PM Naftali Bennet
Yesterday‘Crisis Crisis’: Trump Says US Becoming ‘Cesspool of Humanity’ Over Border Situation
YesterdayFBI: Human Remains Found in Wyoming 'Consistent With Description' of Missing Gabby Petito
YesterdayFrance-UK Defense Minister Meeting Canceled Over AUKUS Fracas - Report
YesterdayFrench Highliner Stops Parisians’ Hearts Crossing Seine 200 Feet Up
YesterdayUnited Russia Leads in Russian General Election With 42% of Vote
YesterdayCelebs Go Skating Host Hopes to Sign Prince Harry & Meghan Markle for the Show, Media Says
YesterdayLetters From Jehovah’s Witnesses in England Blame COVID Pandemic on Satan, Media Says
YesterdaySatellite Snaps Appear to Show Expansion of North Korea’s Nuclear Bomb-making Capabilities
YesterdaySylvain Mbappe: Satirical Website Offers Alternatives to 'Non-French' Names
YesterdayUnited Russia Party Leads in Parliamentary Elections With Over 12% of Ballots Counted - Exit Poll
YesterdayRussian Embassy in Paris Says Checks Info About Russian Man Arrested for Shooting Air Gun
YesterdayVoter Turnout in Russian Parliamentary Elections Exceeds 45%
YesterdayMany Haitians in Texas Border Camp Unwilling to Leave Despite US Deportation Plans