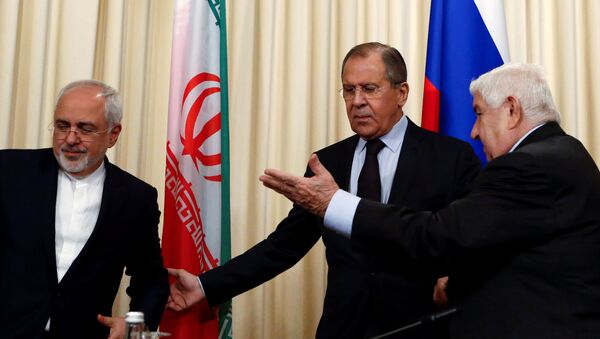 Lavrov Reveals What Pleased Russia in US Stance on Syria
The Russian top diplomat said that during the meeting the parties compared their stances on the recent developments in Syria, including the chemical incident in Idlib and the missile strike by the United States on a Syrian airbase.

Commenting on the Idlib incident, Lavrov said: "There is growing evidence that this was staged, meaning the incident with the use of chemical weapons in Idlib province."

He also underscored that Russia and its allies are calling for an impartial investigation by the Organization for the Prohibition of Chemical Weapons (OPCW) into the incident.

As for the US missile strike, the Russian minister said that "there are too many inconsistencies, discrepancies in the version used to justify the April 7 aggressive action."

Russia, Iran and Syria insist that the United States and its allies respect Syria's sovereignty in line with international obligations, Lavrov said.

How Iran Will Retaliate Against 'Illegal and Inhuman' US Missile Attack on Syria
In turn, Syrian Foreign Minister then called the trilateral meeting with Lavrov and Zarif a "strong message" after the US strike in Syria.

Iranian Foreign Minister Zarif agreed with his counterparts on the need to boost cooperation in fighting terror, as well as carrying out the chemical attack probe.

The unilateral move by Washington in Syria is a challenge against Russia and Iran and this problem should be resolved, according to Konstantin Sokolov, deputy director of the Russian Academy of Geopolitical Problems.

"This provocative act was aimed against Syria as well as Russia and Iran. This act of aggression proves that the US is ready to put the military confrontation in the Middle East to a new level. The goal is to undermine stability and use military force in the region," Sokolov told Sputnik Persian.

The expert stressed that currently Moscow and Tehran play key roles in the Syrian settlement.

"The situation in the Middle East complies with Washington’s strategy in the region. This is done as part of the Great Middle East project. The goal is to undermine the sovereignty of regional nations. Russia and Iran oppose this plan," he said.

Farzad Ramzani Bonesh, an independent Iranian expert on international and regional politics, said that the trilateral meeting in Moscow was a response to Washington’s use of force.

West Fails to Mention That an 'Oppositionist in Syria is Basically a Terrorist'
"Such meetings have already been held, including in Moscow. They included consultation on various political and military issues, but Syria was always in the spotlight. Some decisions made during those meeting resulted in significant changes in the Syrian battlefield. One of the most notable results was the involvement of Turkey in the Syrian negotiating process," Bonesh said.

He added that the talks in Moscow were also aimed at evaluating the consequences of the US missile strike for the future of the Syrian settlement.

The expert also noted that the US move has led to an unprecedented spike in diplomatic tensions, and now all regional players should be involved to settle the crisis.

"Coordination is needed with Syria’s key allies, Moscow and Tehran. This is the only way to resolve the problem. The involvement of Russia and Iran will create the opportunity to find a solution to the Syrian crisis, as a counterbalance to the heavy-handed approach of the US and its allies," Bonesh concluded.