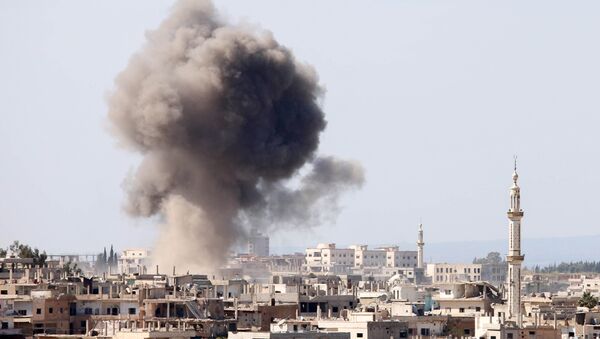 The province of Idlib will become the main and final battlefield of the six-year-long Syrian conflict, political analyst and expert on Middle East Fehim Tastekin told Sputnik Turkey.

"Idlib will become the final act of the tragedy titled the Syrian War, if I may put it this way. It will be this province that will most likely see the fiercest fighting and political standoff among the main stakeholders in the region," he said. "The war in Syria will not be over until the challenges in Idlib are resolved. This is why this area has become such a point of contention. The United States has also played a double game here. On the one hand, the Americans and the Kurds are fighting Daesh. On the other, the CIA has continued to tacitly support and sponsor radical opposition groups."

Tastekin further commented on the Pentagon's unprecedented military operation in Syria. Last week, President Donald Trump authorized a massive airstrike on the Shayrat air base, operated the Syrian Arab Army (SAA). Washington claimed that the facility was ostensibly used to store toxic substances and launch a chemical attack on Khan Shaykhun, a town in the Idlib province.

Syrian leadership and the SAA command denied these claims. The Russian Defense Ministry also said that Damascus did not use chemical weapons since the Assad government destroyed these armaments under a deal brokered by Moscow and Washington in 2013. Moscow and Damascus condemned the Pentagon's operation, the first of its kind during the six-year-long Syrian War.

Damascus: Hundreds Killed in US Strike Against Daesh Depot With Chemical Weapons
Tastekin told the news agency that the United States carried out an airstrike in Syria "in a bid to make room for maneuver," adding that this operation should be viewed as a message to China, North Korea and Iran. He also said that the offensive was part of Washington's "aggressive foreign policy based on military interventions."

The analyst suggested that the United States wanted to expand its zone of influence in Syria, but did not try to cause more extensive changes in the war-torn country.

The Pentagon's airstrike "has not had the effect that for instance Turkey was hoping for. The US doesn't want to fuel tensions," he said. "The price of escalation in the region is very high for both sides, particularly if we take into account how unpredictably events in Syria develop when it remains unknown what could happen tomorrow and how the balance of power would change."

Russian MoD: US Covers Up Aggression With 'Pseudo-Proofs' in Relation to Idlib
Tastekin maintained that the United States is trying to weaken both Syria and Iran in their capacity to be geopolitical stakeholders in the Middle East. This is what Washington views as a priority, in his view.

"This is what the US has been trying to achieve all this time. This is the goal it will pursue in the future," he said. "In addition, the US is trying to weaken all elements that pose a threat to Israel. This is another permanent priority for US foreign policy."

The analyst pointed out that any plan for Syria that does not take into account the stance of Russia and Iran is doomed to fail.

"Washington will try to leverage [what it has achieved by carrying out an airstrike on a Syrian base]. It will try to influence those channels which have an impact on Syria's future. It will bargain during the negotiation process. Russia's military engagement has to a larger extent neutralized America's trump cards. The US is making every effort to change this state of affairs."