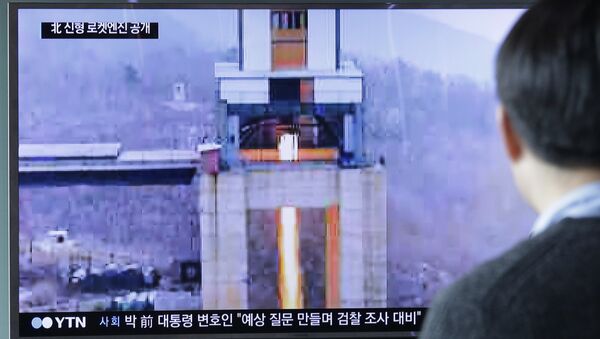 © AP Photo / Ahn Young-joon
Subscribe
The US is incapable of tackling the North Korean issue unilaterally, Kerry Brown, professor of Chinese studies and director of Lau China Institute at Kings College London, told Radio Sputnik, commenting on President Donald Trump's remarks that Washington is willing to deal with Pyongyang on its own, without Beijing's participation if necessary.

"It is likelier that America and others will get what they want if they work with China to [deal with the North Korean issue] rather than if they start unilaterally going and saying that they will solve the problem because they certainly will not be able to," the analyst said.

These comments came after Trump tweeted that Pyongyang was "looking for trouble" in an apparent reference to North Korean's recent missile tests. "If China decides to help, that would be great. If not, we will solve the problem without them!" he added.

​Brown pointed out that although China is unlikely to cut ties with North Korea, it does not necessarily mean that Beijing is happy with Pyongyang's foreign policy.

Pyongyang Could Be Capable of Launching Sarin-Loaded Missiles, Japanese FM Says
"I think clearly China has huge leverage over North Korea. In a more subtle way they will probably be willing to put pressure on the North Koreans. They don't want this instability, particularly at the moment. They have a huge amount to lose. The problem is that North Korea is very desperate. North Korea is the ultimate desperado, so [North Koreans] don't really care what they do. They have a one-track strategy which is just to survive no matter what the cost and they will do anything to achieve that. So when you are dealing with a desperate partner, it's not easy," he said.

Brown also expressed doubt that China would abandon North Korea. He said that there are "pretty much zero" chances of Beijing cutting ties with Pyongyang in favor of a potentially lucrative trade deal with Washington.

"North Korea is the only country that China has a treaty alliance with. It still shares a similar political model. Although they are very different in the way they've developed, that kind of shared history matters," he said. "There is no reason to think that [China] is going to turn its back on that history. I suppose the final thing is that why would [Beijing] want this massive opportunity for America to come into what China would regard as its main strategic space."