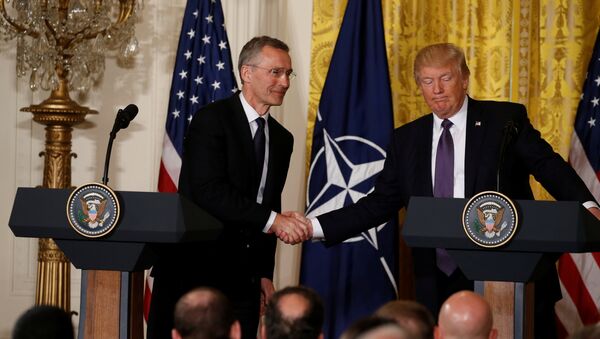 © REUTERS / Jonathan Ernst
Subscribe
In a dramatic reversal of his position, US President Donald Trump claimed that NATO, which he had been criticizing, is no longer "obsolete" and should play more significant role in the fight against Daesh, a violent extremist group banned in a number of countries, including Russia.

WASHINGTON (Sputnik) — NATO is no longer obsolete, Trump told a press conference in a dramatic reversal of his position after holding talks at the White House with alliance Secretary-General Jens Stoltenberg.

"I said it [NATO] was obsolete: It’s no longer obsolete," Trump told the press conference on Wednesday.

NATO Chief Visits White House as Trump Confirms Hawkish Policy in Europe
The statement marked a dramatic reversal after months of consistent policy statements by Trump through the 2016 US election campaign and since he was sworn in as US president on January 20 when he repeatedly criticized the 28-member NATO alliance as outmoded.

Trump said NATO still needed overhauling and repeated his often-stated calls for other members of the venerable security organization to pay more toward their common military cooperation and carry a greater share of the alliance’s burdens.

But Trump made clear he wanted to strengthen NATO, not to dismantle, shrink or weaken it.

"On my visit to Brussels this spring… we will work together. We… must apply new solutions to face new circumstances… [and] reaffirm our commitment to this alliance and to the enduring values that we very proudly share," Trump said.

"We must work together to solve the disaster taking place in Syria," he added. "It is time to end this brutal civil war, defeat terrorists and allow refugees to return home."

Trump repeated his demand that other NATO member nations must pay their "fair share" of its costs instead of relying on the United States.

Putin: Russia Sees No Real Transformation of NATO
"We must also ensure that NATO members must meet their financial obligations… Many have not been doing that… If other countries paid their fair share instead of relying on the United States we would all be more secure and stronger," the US president insisted.

Trump also made clear he envisaged NATO playing a far larger role in the campaign to destroy Daesh (outlawed in Russia) and to take a leading role in combating terrorism around the world.

"It is my hope that NATO will take on an increased role in the battle against ISIS [Daesh]," he said.

Trump expressed his hope that Europeans will have nothing to fear from Russia as he seeks to deescalate tensions.

"There won't be fear of anybody. That's the way it should be," he said, adding a bold vow to solve all the world's security conflicts by the end of his term.

Stoltenberg expressed full agreement with Trump on the issues of fairer burden-sharing with the United States by other NATO members and on expanding the organization’s role in the Global War on Terror.

"NATO can and must do more in the global fight against terrorism. NATO has the experience the expertise and the staying power to make a real difference… The other major topic will be burden sharing in our alliance. Mr. President, I thank you for your attention to this issue," he said.

Moscow: Montenegro’s Course to Join NATO Without Referendum Counterproductive
Stoltenberg remarked that NATO members had finally reversed a long trend of paying diminishing proportions of their gross domestic product every year on defense.

"We have now turned a corner… In 2016, for the first time in many years we saw an increase in defense spending of 3.8 percent or $10 billion more in our defense," he said.

Stoltenberg also insisted that NATO had to build up its military forces in Eastern European nations close to Russia.

"One element of that [increased preparedness] is to increase our military presence in the eastern part of the alliance… increasing the readiness and the presence of our armed forces… We consider the presence when the four battle groups are in place as sufficient for peace in Europe," he said.

Stoltenberg claimed that the military buildup posed no threat to Russia.

"It is defensive. We believe there is no contradiction between a strong nation and a condition for credible dialogue with Russia is that we are strong and we are united," he said.

Russian officials have repeatedly expressed concern over the US and NATO military build-up on its borders as being a destabilizing rather than a stabilizing force in Europe.

"I strongly believe that the only way to deter Russia is to be strong," he said.

Stoltenberg also said he was determined to deploy more NATO troops in the eastern part of the alliance.

000000
Popular comments
Interestingly Trump thinks that Daesh is in the Baltics and Polan on the Russian border.

arpito
13 April 2017, 08:37 GMT3
000000
The war machine must be propped up. The globalist don't own media, banks and arms manufacturing for nothing. WWIII with Russia has always been the goal as well as destabilizing the ME and Europe. US has been at war 223 of 240 years since 1776. Why? Because war is the most profitable business on earth. We have another war dog in the White House. The Americans has been fooled again as they have been so many times before
Linda
13 April 2017, 08:41 GMT3
000000
Newsfeed
0
New firstOld first
loader
LIVE
Заголовок открываемого материала
Access to the chat has been blocked for violating the rules . You will be able to participate again through:∞. If you do not agree with the blocking, please use the feedback form
The discussion is closed. You can participate in the discussion within 24 hours after the publication of the article.
To participate in the discussion
log in or register
loader
Chats
Заголовок открываемого материала
Worldwide
InternationalEnglishEnglishMundoEspañolSpanish
Europe
DeutschlandDeutschGermanFranceFrançaisFrenchΕλλάδαΕλληνικάGreekItaliaItalianoItalianČeská republikaČeštinaCzechPolskaPolskiPolishСрбиjаСрпскиSerbianLatvijaLatviešuLatvianLietuvaLietuviųLithuanianMoldovaMoldoveneascăMoldavianБеларусьБеларускiBelarusian
Transcaucasia
ԱրմենիաՀայերենArmenianАҧсныАҧсышәалаAbkhazХуссар ИрыстонИронауОssetianსაქართველოქართულიGeorgianAzərbaycanАzərbaycancaAzerbaijani
Middle East
Sputnik عربيArabicArabicTürkiyeTürkçeTurkishSputnik ایرانPersianPersianSputnik افغانستانDariDari
Central Asia
ҚазақстанҚазақ тіліKazakhКыргызстанКыргызчаKyrgyzOʻzbekistonЎзбекчаUzbekТоҷикистонТоҷикӣTajik
East & Southeast Asia
Việt NamTiếng ViệtVietnamese日本日本語Japanese俄罗斯卫星通讯社中文（简体）Chinese (simplified)俄罗斯卫星通讯社中文（繁体）Chinese (traditional)
South America
BrasilPortuguêsPortuguese
NewsfeedBreaking
12:24 GMTRussia's SCO Envoy Says Taliban Recognition Not on Agenda, While Dialogue is Important
12:12 GMTLava Flow Destroying Settlements Forces Evacuation as La Palma Volcano Continues to Erupt
12:10 GMTUNSC Discussing Security and Climate Change
12:08 GMTBalls to the Wall: Oklahoma Man Gets 12 Years in Prison for Failed Castration of Volunteer
12:02 GMTThe Spy Who Abused Me: Director of Latest Bond Movie Calls Sean Connery's 007 a 'Rapist'
11:56 GMTIt's a Gas!... Russia Blamed for Europe's Fuel Crisis
11:45 GMTWhen It Rains, It Pours: UK Defence Ministry Reportedly Allows Another Afghan Data Breach
11:40 GMTMan United Players Frustrated as the Team Out of Carabao Cup After Stunning Loss to West Ham
11:01 GMTPoland to Deploy 250 US-Supplied Abrams Tanks on Eastern Border, Defence Minister Says
10:50 GMTGerman Greens Leader Accuses Russia of Exacerbating Gas Crunch
10:38 GMTRIP 'Godfather of Black Cinema': Filmmaker Melvin Van Peebles Dies at 89
10:28 GMTBoris Johnson Reveals Why He Wants to Be Renamed in Honour of Ancient Greek God of North Wind
10:22 GMTHis Royal Highness No More? UK Queen Could Strip Prince Andrew of HRH Title Amid Sex Assault Case
10:02 GMTJohnny Depp Says No One is 'Safe' From Cancel Culture as He Hints That 'MeToo' Got Out of Hand
09:51 GMTPutin, Zelensky to Meet When Both Are Ready, Kremlin Says
09:49 GMTMarseille Football Team Blames Mass Brawl of Spectators on Provocation by Angers Fans - Video
09:31 GMTGeneva to Host New Round of Russian-US Strategic Stability Talks Next Week, American Ambassador Says
09:24 GMTUS House Committee Approves Amendment Recommending Sanctions Against Russian Officials
09:23 GMTSCO to Coordinate Effort to Prevent Threats Coming From Afghanistan, Russian General Staff Says
09:12 GMTAll Crew Members From Crashed Russian An-26 Plane Perished, Remains Found