Seoul Police Raid Those Responsible for Rally Against President Impeachment 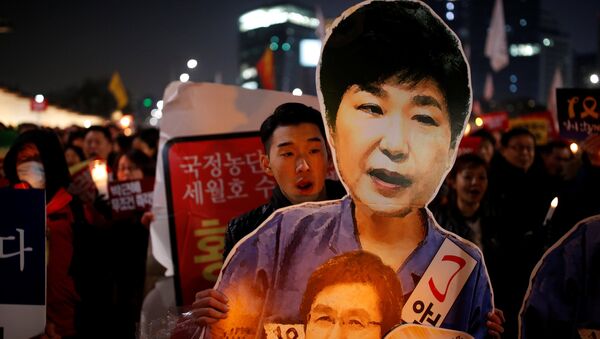 © REUTERS / Kim Hong-Ji
Subscribe
South Korean police raided the office of those responsible for the March 10 mass rally in Seoul against the impeachment of President Park Geun-hye.

Wroom-Wroom! Court Allows Farmers on Tractors to Join Protest in Seoul
According to the Yonhap news agency, the police confiscated papers related to the demonstration. The group itself was established to campaign against the impeachment of the president accused of bribery, coercion and abuse of power.

On March 10, the South Korean Constitutional Court upheld the December 2016 parliamentary decision to impeach Park over a corruption scandal involving her close associate Choi Soon-sil, who allegedly was allowed to meddle in state affairs without holding any official post. The move provoked violent clashes between the pro-Park protesters and police, which left three people dead.

According to the media outlet, on Wednesday, police questioned group's spokeswoman Chung Kwang-yong, who said that police had been responsible for the casualties, as excessive force had been used against the crowd.

On March 30, Park was arrested after the Seoul Central District Court issued a warrant for her arrest over corruption accusations, involving 13 different cases of bribery, coercion and abuse of power. Park, in particular, has been charged with forcing major corporations, including Samsung, to donate to foundations controlled by Choi and taking bribes, as well as with forcing companies to sign contracts beneficial for Choi and her associates.

The early presidential election in the Asian state is expected to take place on May 9.