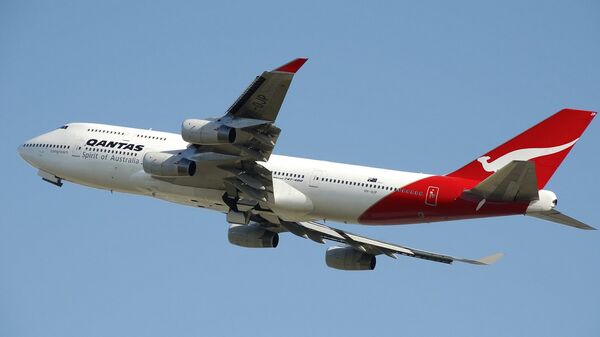 © Photo : Pixabay
Subscribe
International
India
Africa
Over a dozen people were injured in a "stick shaker" accident on a flight from Melbourne, Australia to Hong Kong, the Australian Transport Safety Bureau (ATSB) has announced.

MOSCOW (Sputnik) – Some fifteen people were injured when a "stick shaker" stall warning went off, the ATSB said.

"While holding at flight level 220, the flight crew received a stick shaker activation and detected airframe buffeting. The flight crew disconnected the autopilot and manoeuvred the aircraft in response. Fifteen passengers received minor injuries," ATSB said in a Thursday statement.

The incident occurred on April 7, when the Qantas Boeing 747 flight was about 110 kilometers (68 miles) southeast of Hong Kong, according to ATSB.

Turbulent Times for United as Stock Falls by $1.4Bln in Wake of #DraggingGate
"As part of the investigation, the ATSB will interview the flight crew and gather additional information," the bureau said on Thursday, adding that it plans to release a report "within several months."

It is unclear how many passengers were on board the flight.

A "stick shaker" warning is when the control yoke of an aircraft shakes to warn of an imminent stall.