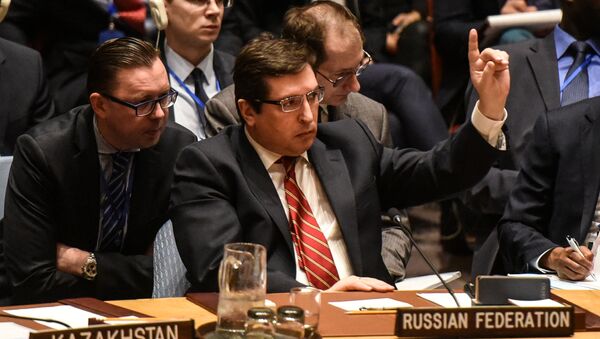 Russian Mission to UN Presented New Draft Resolution on Syria Chemical Attack
MOSCOW (Sputnik) — On Wednesday, the Russian diplomat harshly criticized the UK envoy to the UN at a meeting of the UN Security Council on Syria as the British ambassador accused Russia of supporting Syrian President Bashar Assad calling him a "criminal."

Safronov struck back at the UK diplomat and warned him against "offending Russia."

"Nothing offensive was said. Manifestations of the spinelessness are fraught in the future with deplorable consequences. Therefore, it is better to defend the interests of our homeland today, and, if necessary, in a rather tough manner," Peskov told reporters.

US Submitted Draft Resolution on Syria to UNSC Based on Fake Reports - Moscow
In additional to the war of words at the UNSC, Russia also vetoed a US, UK, France-proposed resolution on the investigation into the Idlib chemical attack.

Russian Foreign Ministry spokeswoman Maria Zakharova said last week that the US-UK-France-backed draft resolution on the chemical weapons in Syria is based on fake reports mosty from the White Helmets and the SOHR "which cannot be called reliable."