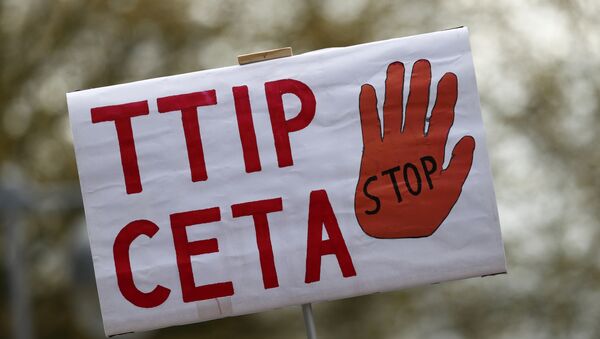 Trump and EU in Standoff Over TTIP Win-Win, Win-Lose 'Game'
MOSCOW (Sputnik) — Trump's proposed protectionist measures include withdrawing from or altering a number of international trade agreements and imposing higher import tariffs in order to revitalize the United States' industrial sector and secure more domestic jobs. The president has singled out China by accusing the country of dumping and undervaluing its currency while threatening a 45 percent tariff on Chinese imports.

"We are hostile to all of these treaties. Nicolas Dupont-Aignan was one of the first to speak out against them. They will destroy large sectors of our economy and reinforce the multinational corporations. From this point of view, we can only approve the stance taken by Trump. Dupont-Aignan will put an end to these negotiations and will review unilaterally those that have already been concluded, if elected," Eric Anceau said, commenting on the candidate's attitude to US-EU Transatlantic Trade and Investment Partnership (TTIP) and Canada-EU Comprehensive Economic and Trade Agreement (CETA).

World
TTIP Neither Alive Nor Dead, EU Ready to Continue Discussions With US
Since taking office in January, Trump has ordered the withdrawal of the United States from the Trans-Pacific Partnership (TPP) as well as the renegotiation of the North American Free Trade Agreement (NAFTA).

TTIP is also in limbo, as negotiations on the deal were put on hold after former President Barack Obama left office and his successor moved toward bilateral deals. Since its inception, TIIP was put into question by the French government, which argued that the United States had offered little in return for concessions made by Europe.

On February 15, the European Parliament voted in favor of ratifying the Canada-EU Comprehensive Economic and Trade Agreement (CETA). However, following the request of 153 French elected politicians, the French Constitutional Court in March launched a full investigation into CETA after a call to block the agreement.