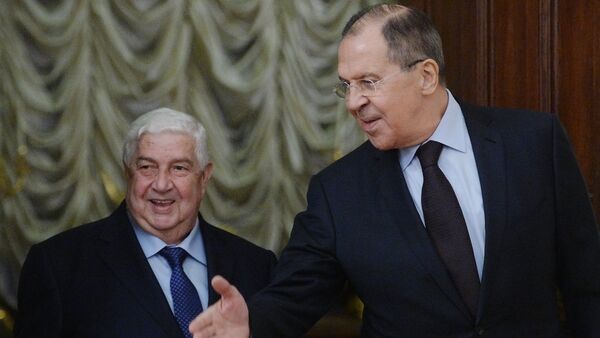 According to the Syrian foreign minister, Damascus values highly Russia’s position regarding the US aggression against Syria.

"I must give high appreciation to the position of the Russian government and authorities, president [Vladimir] Putin and the whole friendly Russian nation for the principled position that Russia took in relation to US aggression," Muallem said at talks with Russian Foreign Minister Sergei Lavrov.

According to the foreign minister, Damascus does not believe that the West will agree for conduction of an Organization for the Prohibition of Chemical Weapons (OPCW) inspection regarding the suspected chemical attack in Syria’s Idlib.

"We invited the inspectors to hold an investigation. But we are sure in advance that the west will not agree to it," Muallem said during a meeting with Russian Foreign Minister Sergei Lavrov.

Damascus believes that the role of the Geneva process in the Syrian settlement has been reduced to minimum after US President Donald Trump came to power, Muallem added.

Too Early to Set Up Body on New Syrian Constitution - Moscow
"We noticed that when the Trump administration came to power, the US role in the Astana and the Geneva process has been reduced to the very minimum. This means that they do not want success in the peace process," Muallem said during a meeting with Russian Foreign Minister Sergei Lavrov.

On April 6, the United States launched 59 Tomahawk cruise missiles at the military airfield in Ash Sha’irat in response to the alleged chemical weapon use in Syria's Idlib province.

Syrian Foreign Minister Walid Muallem denied the government’s involvement in the Idlib incident, saying it had never used chemical weapons on either civilians or terrorists operating in the country and would never do so.