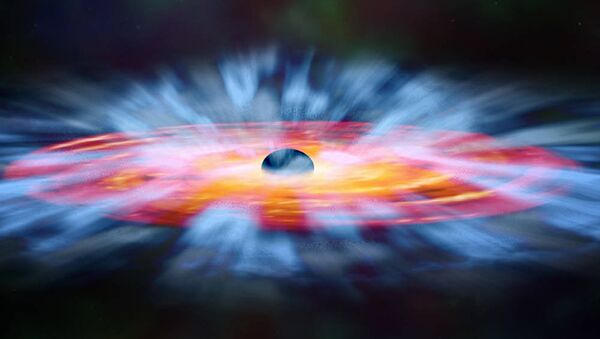 © NASA . M. Weiss (Chandra X -ray Center)
Subscribe
For the first time ever, astronomers have successfully imaged a black hole by training eight telescopes on three continents on it, creating a virtual telescope as large as the Earth itself in the process.

Every image you've ever seen of a black hole was nothing more than a illustration. Black holes eat light (along with everything else) that comes too close to them, meaning they give off virtually no light of their own. The closest black holes that we know of are pretty small by black hole standards: V616 Monocerotis is 3,000 light years from Earth and is about 9 to 13 times the size of our sun.

The bigger the black hole, the easier it'd be to image. Supermassive black holes are often surrounded by accretion disks, a ring of matter orbiting a large celestial object. (Saturn's rings are probably the most famous example of an accretion disk.) These disks can include superheated plasma jets, and those give off a good amount of light – but they also obscure our view of the black hole itself.

The closest supermassive black hole to us is Sagittarius A*, a behemoth 4 million times as massive as the sun. It's the heart of the Milky Way Galaxy, and is located 27,000 light years from Earth. Its sheer size made it the best candidate to image, but there was no telescope powerful enough for the task.

The solution? A really freaking big telescope – or more specifically, a network of observatories working together to form a telescope array. The array is called the Event Horizon Telescope (EHT), and the idea is simple: each telescope trains on a different section of the black hole, imaging a section of it. Then the data is collated and an image of the complete black hole is assembled like a jigsaw puzzle.

"Instead of building a telescope so big that it would probably collapse under its own weight, we combined eight observatories like the pieces of a giant mirror," said Michael Bremer, an International Research Institute for Radio Astronomy (IRAM) astronomer and a project manager for the EHT, to AFP.

"This gave us a virtual telescope as big as Earth – about 10,000 kilometers [6,200 miles] in diameter." This telescopic array could find a golf ball on the moon if they felt like it, he said.

The EHT utilized telescopes in Arizona, Chile, Hawaii, Spain and Antarctica for this task. They studied Sagittarius A* from April 6-11, collecting around 10 petabytes of data in just five days. By comparison's sake, the Large Hadron Collider in Switzerland collects roughly the same amount every eight months. That's a fair guess for how long it'll take to parse the EHT's images and develop the first photo of a black hole, too.

"For the first time in our history, we have the technological capacity to observe black holes in detail," said Bremer. "The images will emerge as we combine all the data, but we're going to have to wait several months for the result."

There's more at stake to a black hole photo than bragging rights. Much is still unknown about the jet-black giants, such as how gravity behaves within Sagittarius A*. "Even if the first images are still crappy and washed out, [they] can already test for the first time some basic predictions of Einstein's theory of gravity in the extreme environment of a black hole," contributor Heino Falcke from Radboud University told Engadget.