US, Singapore Air Force Crews Team Up on Regional Security 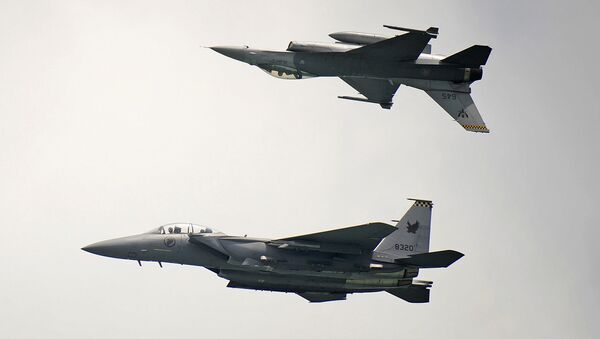 © AP Photo / Bryan van der Beek
Subscribe
Singapore’s Air Force and the US Air Force will collaborate in exercises aimed at enhancing security at a US air base in Guam.

The tag-team marks the first sign of cooperation between Washington and Singapore’s air crews, according to Singapore’s Ministry of Defense. On Tuesday, Defense News reported that six RSAF F-15 fighters had been deployed to US’s island territory to conduct joint exercises.

On April 6, Defense Minister Ng Eng Hen and US Secretary of Defense James Mattis met at US military headquarters in Washington, DC, to reaffirm “strong military-to-military ties.” The two nations are not formal allies, according to the Brookings Institution, but “continued US presence in the Asia-Pacific” is important for “ensuring regional peace and stability,” according to a Singapore MoD statement.

At their meeting, Mattis and Ng “discussed initiatives to promote stability in the Asia-Pacific, noting that countries should engage in practical cooperation to counter threats relating to maritime security.” It stands to reason that during their talks they moved forward with plans to conduct joint air force exercises.

The drills began April 10 and will conclude May 17, Defense News notes.

Singapore has multiple sources of security concern. One of Singapore’s neighbors, Indonesia, is home to the world’s largest Muslim population, some of whom have joined forces with the Daesh terror group. “Hundreds in Malaysia and Indonesia have joined ISIS in the Middle East,” according to a July, 2016 Brookings research brief. These volunteers have formed a group within Daesh’s ranks, dubbed Katibah Nusantra, the brief notes.

One of the ways in which the migration of South Asian nationals could impact Singapore is that the Middle East essentially offers a training ground where volunteers can become bona fide experienced fighters who might then return back to South Asia.

From a regional perspective, the “greatest concern” for Singapore is Chinese actions in the South China Sea, Brookings notes, even though Singapore sees China’s rise to economic prominence as a positive development.

A security assessment conducted in 2016 by the International Institute for Strategic Studies determined the most potent destabilizing regional factors include militarization in the South China Sea; regional flashpoints on the Korean Peninsula and in Taiwan; and the “challenges from unregulated migration and the Islamic State.”