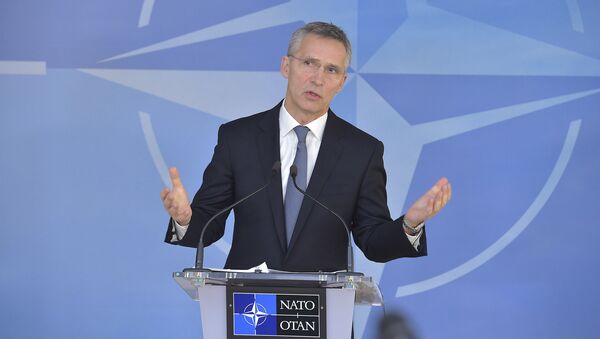 NATO Secretary-General Jens Stoltenberg’s scheduled visit to the White House to meet with US President Donald Trump on Wednesday comes as the US leader embraces the hawkish foreign policy approved by his predecessor Barack Obama.

Moscow: Montenegro’s Course to Join NATO Without Referendum Counterproductive
WASHINGTON (Sputnik) — On Tuesday, Trump signed off on Montenegro's upcoming accession into NATO, helping pave the way for the military alliance's expansion in the Balkans.

The White House said in a statement that Trump looks forward to welcoming Montenegro as the 29th member of the NATO alliance at next month's meeting in Brussels.

The Senate in March voted overwhelmingly to ratify the tiny Balkan nation's entry into the alliance.

Russia strongly opposes the expansion of the Western military alliance in a region it considers part of its strategic sphere of interest.

Trump's move occurred only a day before his scheduled meeting with Stoltenberg.

Trump Ratifies Protocol for Montenegro’s Accession to NATO
On February 17, Trump’s Secretary of Defense James Mattis pledged at the annual Munich Security Conference that the US government was committed to making the NATO alliance "relevant and fit for its time."

Addressing the recent concerns over Trump's criticism of the alliance as obsolete, Mattis said NATO "will be unified in meeting today’s security challenges."

Mattis also emphasized that Trump was determined to confirm the increased forward deployment of US and NATO military forces that Obama had approved at the July 2016 NATO summit in Warsaw.

Mattis confirmed that "the United States is moving units into the Baltic states – Poland, Romania, and Bulgaria – under Operation Atlantic Resolve" in what he described to be "a wholly defensive deployment to maintain deterrence."

Serbia to Commemorate All Victims of 1999 NATO Bombings of Yugoslavia
At its Warsaw summit in July, NATO also made a decision to send multinational battalions to Latvia, Lithuania and Estonia.

Trump also plans to attend the planned NATO heads of state summit at alliance headquarters in Brussels on May 25.

Trump and Mattis also took care to keep NATO and Stoltenberg in the loop when they approved the US cruise missile bombardment of Syria’s Ash Sha’irat military airfield last Thursday.

Damascus bears full responsibility for the US missile attack, the NATO chief stated on Friday.

Stoltenberg supported the US claim that Syrian forces were responsible for the use of chemical weapons in the village of Khan Shaykhun on April 4, which killed some 80 people, including many children.

Stoltenberg stressed that any use of chemical weapons was unacceptable and called for accountability.

Curses! Foiled Again! NATO Defense Spending Push Runs Into Berlin Wall
The Syrian government has denied using chemical weapons, and has reminded the international community that its entire stockpile was destroyed in 2016 by the Organization for the Prohibition of Chemical Weapons.

Trump has also gone along with NATO’s planned military buildup and Sea Shield exercises in the Black Sea, which began at the beginning of February and which Russia views with concern.

NATO has been boosting its military presence in Eastern Europe and the Black Sea since spring 2014, citing security concerns over alleged Russian aggression. Moscow has said that the NATO buildup could only further escalate tensions.