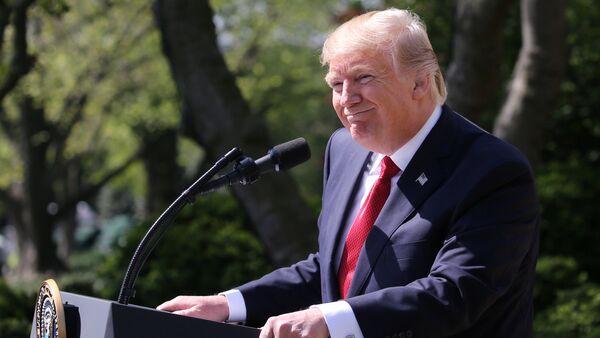 © REUTERS / Carlos Barria
Subscribe
International
India
Africa
Raytheon stock surged Friday (April 7), after 59 of the company's Tomahawk missiles (US$1.4 million apiece) were used in the US airstrike on Syria. While the attack may have slain innocent civilians and soured improving US-Russia relations, its shareholders - including President Trump - can look forward to increased dividends and capital growth.

In all, the company added around US$1 billion to its market value in the hours immediately following, a level it has largely sustained since. Other defense stocks were similarly buoyed, including Lockheed Martin (+0.28%), L3 Technologies (+1.78%) and Harris Corp. (+0.62%).

#Trump owns #Raytheon stock, manufacturer of the missiles used for his #Syria strike, which jumped since attack https://t.co/wlGknjcbsQ pic.twitter.com/LVBZiiH1tA

​Defense is big business in the US, and millions of Americans invest in the industry as a result, whether directly (via shareholding) or indirectly (via their 401k pension provision) — and official documentation indicates Trump falls in the former category. While the President's financial affairs have often been the source of controversy, with frequent claims he has specifically pursued policies in order to enrich himself, there is no suggestion the president purposefully ordered the airstrikes to enhance his stock portfolio.

However, as an investor in the firm, he has certainly reaped some windfall from the attack.

FYI:
Donald Trump OWNS stock in RAYTHEON — the manufacturer of the 59 Tomahawk MISSILES that missed the target but made the stock surge.

A July 2015 Federal Election Committee (FEC) document on Trump's portfolio prior to his election indicates Raytheon was one of Trump's smaller shareholdings at the time.

Line 23 of the form suggests the holding then had a value of between US$1,001 and US$15,000, delivering US$201 or less in income annually. Newer FEC disclosure forms suggest the stock remains in Trump's collection, and levels of derived income have risen to between US$1,001 — US$2,500.

Given the size of the holding, the billionaire likely gained relatively little from the attack. Still, the Tomahawks used will inevitably be replaced, meaning Trump effectively signed a cheque to Raytheon work over US$100 million from public coffers.

Moreover, the choice of Tomahawks has raised eyebrows in certain quarters, Russian S-400 surface-to-air defense technology in Syria could easily have shot them down — and the damage was so minimal that jets were able to take off from the airbase less than 24 hours after the attack, and the Syrian military was able to repel opportunistic attacks from emboldened terrorist groups. The base has now returned to full operational capacity.

Seems that MOD Ministers pretty much *only* meet with military corporations https://t.co/30PzKLYEgG pic.twitter.com/vIzjZm6J6B

Cosy relationships between governments and defense contractors are a common problem in Western countries, with disclosure data indicating UK Ministry of Defense's ministerial meetings between April and June 2016 primarily consisted of summits with defense firms, such as BAE.